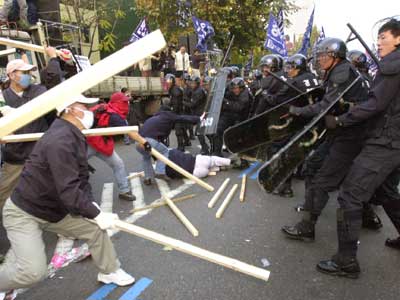 Search for the headline "protest turns violent," and you'll likely find some very recent news articles. In many cases, the circumstances leading up to the breaking point follow a very similar pattern. On one side, advocates gather to promote their cause, picketing or engaging in civil disobedience. On the other, a government sends in police to keep an eye on the situation.

­Both sides of this line in the sand represent the power of potential violence. The government ultimately enforces all its laws with the threat of violence. Likewise, the threat of mob mentality quivers at the heart of even the most peaceful protest. One side represents tyrannical rule, the other chaotic rebellion -- and the violence of either is often easily provoked. One bottle thrown in anger, one police baton leveled out of fear, and the situation can explode. For instance, an antigovernment protest in Sofia, Bulgaria, turned violent in January 2009 when the peaceful standoff between activists and police was disturbed by a gang of masked youths. The alleged hooligans threw rocks and ice at the police, who reciprocated with tear gas.

On an individual level, protesters in a riot situation allow their frustrations and angers to overflow into violent rage. A kind of herd mentality takes hold, encouraging an atmosphere of mob violence. Riot ensues. For this reason, proper event planning plays a vital role in any protest movement, but if tensions are running high, the course of events can come down to the foolish behavior of just a few. Even if protesters and police are on their best behavior, citizens with dissenting viewpoints may get involved.

If every large-scale protest, on some level, holds the potential for riot, then you could argue that all protests level the threat of violence against their target. Certainly, this is one of the reasons police keep a close eye on protests. Yet this is very different from open war or guerrilla warfare, which involves active rebellion.

Protest also differs from terrorism, which involves the use of fear to achieve a goal -- generally by using violence against civilians. A political rally and a terrorist attack may both support the same cause, but their methodology differs greatly. Yet a terrorist who carries out an attack may view his or her actions as mere protest. To learn more, read How Terrorism Works.