Change the World or Die Trying 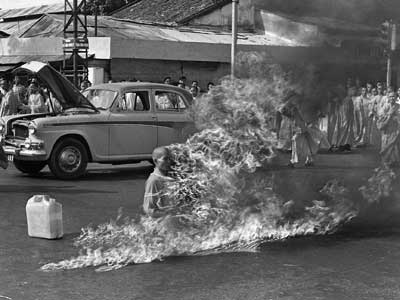 Few images capture the power of self-sacrifice in protest more than that of Buddhist monk Thich Quang Duc, serenely posed in meditation on a Saigon street as the flames of immolation roll over his flesh.
AP Photo/Malcolm Browne

­­The example of the noble torture victim appears in various cultures, from N­ative American campfires to tales of European Christian martyrs. In these stor­ies, the torturers always do their worst to invoke rage and desperation from their prey -- and ultimately fail. The victim dies and the tormentors are left with only the knowledge of their fruitless and bloody deeds. They have achieved a physical victory, but a crushing moral defeat.

­Martyrdom captures much of this same energy, empowering a single death to unify a cause, firmly establishing the roles of victim and tormentor. Unsurprisingly, many martyrs stem from times when public execution or torture were used as a means to instill a population with fear. Today, such displays have largely fallen by the wayside in many parts of the world, giving spectacles of public death far more resonance than in previous centuries. Plus, while past tales of martyrdom had to travel secondhand, the media makes it possible for a death to be witnessed by countless millions.

As such, hundreds of individuals have given their lives for a cause in the last century alone [source: Biggs­]. Unlike suicide terrorists, who give their life to take the lives of others, these individual protesters place only their own life on the altar of their cause. In addition, while not always fatal, prisoners often use hunger strikes to draw attention to their plight and magnify the moral bankruptcy of their captors.

Few methods of suicide protest, however, are as dramatic as self-immolation. Mahayana Buddhist monks have long favored this tactic and, in 1963 a photo of Thich Quang Duc protesting the South Vietnamese government sent shock waves around the world. Much of human fear distills down to the genetic need to avoid pain and death -- and, in this iconic photo, one man appears to enter calmly into the jaws of both.

Such sacrifice advances a cause in two ways. First, it makes a powerful statement about the severity of the situation. Second, it further ingrains the importance of the cause to its supporters. If this person is willing to die to achieve this end, shouldn't the rest fight harder for it?

But violence in protest is not always so self-contained.