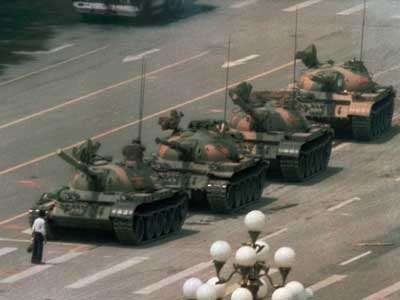 A Chinese man stands alone to block a line of tanks during the Tiananmen Square protests of 1989 -- an image that has come to symbolize the power of nonviolent protest.
AP Photo/Jeff Widener

­For ages, humans have met violence with violence. Governments have responded to sedition with brutal crackdowns, and repressed citizens have risen up against their persecutors in armed rebellion. Such actions have set the course of human history, and whole nations and peoples have vanished beneath this blood-dimmed tide. Yet history has also shown us that change can be achieved another way.

­Thoreau's dream of a peaceful revolution came to full fruition in the hands of another famous protester: India's Mahatma Gandhi. In the early 1890s, Gandhi worked as a legal adviser to an Indian law firm in South Africa. While there, he encountered racial intolerance firsthand. Inspired by the works of Thoreau, Leo Tolstoy and Jesus Christ, Gandhi campaigned for the rights of Indians in South Africa before returning to his native homeland to rally support against British colonial rule and the ancient caste system.

Gandhi's methods, however, went beyond mere civil disobedience. Instead of limiting himself to written criticism and personal noncompliance, he actively organized peaceful protests and coupled Thoreau's methods with passive resistance. He called this strategy satyagraha, which is Sanskrit for "truth and firmness." In India, he organized massive protests against British rule and quickly recruited millions to his cause. The empire's response, however, wasn't always so peaceful.

In 1919, British troops opened fire on demonstrators in the city of Amritsar, killing an estimated 379 and injuring 1,200 [source: Britannica]. The incident came to be known as the Jallianwala Bagh Massacre, and rather than provoking violent revolution, the bloodbath further committed the Indian people to Gandhi's path of nonviolent resistance. Satyagraha required them to remain passive, even in the wake of violence. The protesters would squat in the streets to block traffic. Even if kicked and beaten, they refused to move or fight back. If they met violence with violence, they would have been merely inciting a riot.

When British forces responded with gunfire in Amritsar, Gandhi called for noncompliance. Indian public officials resigned from the British government, parents withdrew their children from British schools and virtually anything bearing the royal seal was boycotted. India's struggle for independence paid off in 1947, when nearly two centuries of British rule came to an end.