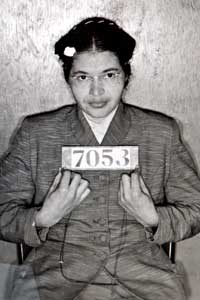 Rosa Parks was arrested for refusing to give up her bus seat to a white passenger -- a simple but powerful act of civil disobedience.
AP Photo/Montgomery County Sheriff's office

­You can disagree with the government all you want, but what are you going to do about it? Your system of rule may offer official avenues for pursuing change, but these are often far from the shortest path to change. Yet more direct methods, such as open rebellion, are often out of the question. As such, many individuals merely stand back while their country continues down a path that they find morally reprehensible. Nineteenth-century American philosopher Henry David Thoreau proposed a different course of action: civil disobedience.

­If you went to a restaurant and the meal was completely inedible, would you pay for it? Chances are you wouldn't -- and Thoreau applied the same logic to government. At the time, slavery was legal in the United States, and the country was at war with Mexico. Thoreau simply stopped paying his taxes, effectively refusing to pay for a government whose policies he found morally wrong. As a result, the author quickly found himself behind bars.

Thoreau was no fool. He didn't expect his brief stay in prison to end a foreign war or free an enslaved people. His point was that citizens shouldn't sit back and tolerate an unjust government. "A minority is powerless," he wrote, "while it conforms to the majority; it is not even a minority then; but it is irresistible when it clogs by its whole weight."

He argued for a kind of peaceable revolution, in which it quickly becomes easier for the government to listen to protesters' demands than to lock them up for their nonviolent offenses. If customers routinely refuse to pay for a restaurant's inedible soup, the owners will have to rethink the menu.

One of the more famous examples of civil disobedience in the United States was the 1955 case of Rosa Parks, whose simple refusal to give up her bus seat helped galvanize the civil rights movement. At the time, Alabama state law required blacks to sit at the back of the bus and relinquish their seats to white passengers if the vehicle was full. She didn't argue her case at a board of commissioners meeting, nor did she assault the bus driver. She simply refused to comply with a law she saw as unjust. Her actions inspired a 381-day boycott of the Montgomery bus system. The following year, the U.S. Supreme Court banned segregation on public transportation.