Browse the article Private Firefighters Have Been Dousing Flames for Decades 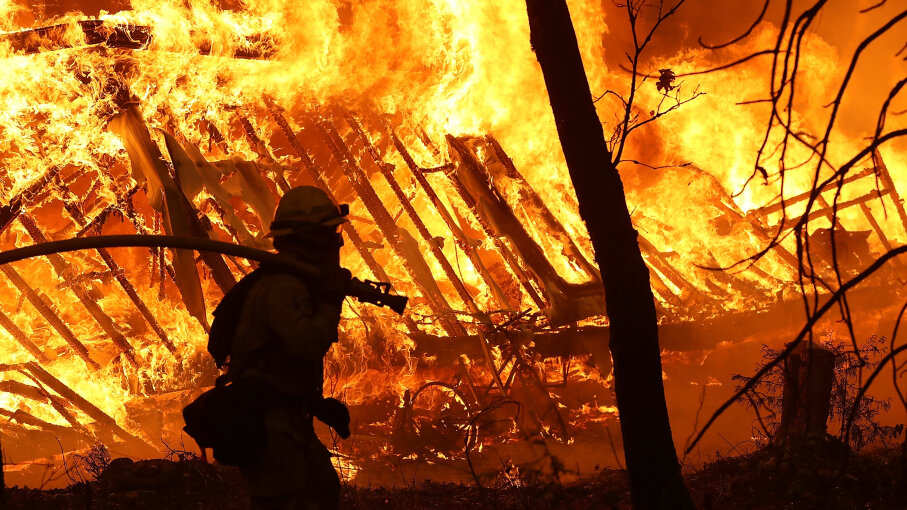 A Cal Fire firefighter monitors a burning home on November 9, 2018 in Magalia, California, as the Camp Fire moves through the area. Justin Sullivan/Getty Images

When one of this fall's California wildfires endangered a gated community in Ventura county, local county firefighters rushed in to try to protect the homes there. But they weren't alone in the effort. As the Los Angeles Times reported, a private crew of firefighters, provided by an insurance company as part of a local homeowner's coverage, also fought to control the flames.

As the homeowner told the Times, she wasn't sure whether it was the public or private firefighters who had saved her home, but she was simply grateful to them all.

The headlines went to Kim Kardashian and Kanye West, who were initially booed for employing their own private firefighting team, but then received kudos for the help their firefighters provided the neighborhood.

Private firefighting services actually have a long history. The first private brigade was established in England in 1699 by the Hand in Hand Insurance Company, which recruited watermen from the Thames River to work as firefighters and porters who salvaged goods from insured homes, according to the U.K.'s Firefighter Foundation. The firefighters wore metal badges that bore the insurance company's emblem.

But private firefighting didn't spread across the Atlantic, according to Gary Urbanowicz, director of the New York City Fire Museum. Instead, in the colonies, citizens formed their own volunteer fire companies. "George Washington was a volunteer fireman down in Virginia," Urbanowicz explains in an interview. "If you look at the origins of organized firefighting in America in the 1730s, it was very much the citizenry helping to form the infrastructure of the government." Eventually, municipal fire departments with paid professional firefighters emerged as well.

But as wildfires in the western U.S. began to grow bigger, longer and more frequent over the past few decades, private firefighting companies began to emerge to assist in controlling them and protecting homes in endangered areas.

Chubb, one of the world's biggest insurance companies, began contracting with a private firefighting service more than 10 years ago, a Chubb spokesperson, says in an email. The coverage is offered as part of its homeowner policies to all single-family homeowners in 18 states that are prone to wildfires.

When a wildfire breaks out, the private firefighters may move in to take preventive measures, the spokesman says. They help to protect homes by clearing out combustible items such as wood piles and outdoor furniture, and seal vents to make sure that embers don't get into the home. Additionally, they bring along portable water tanks, known as snap tanks, or utilize the home's water lines, to hydrate the property and make it less flammable. They also may treat vegetation with a powder-base fire retardant, or even spray fire retardant on the home itself, the spokesman says.

Chubb's private firefighting services "are deployed to properties based on threat level and where our services can do the most good," he says. "Those actions are dictated by individual property, threat level, as well as current and projected conditions within a two mile radius of the property."

Other private firefighters actually work as government contractors. Greg Barker, co-owner of Spokane, Washington-based West Coast Wildfire LLC, says in an interview that his three-year-old outfit does all its work under contract from the U.S. Forest Service. The company primarily works in Region 6, which covers Washington state and Oregon.

The private firefighters generally are called in only after all of the local, state and government firefighting resources have been deployed and more help is needed, Barker says. The work usually comes in about a 60-day window from late July to September.

But when Barker's outfit gets the call, the work is intense and dangerous. He and his colleagues take small four-wheel-drive fire engines called brush trucks, which are capable of navigating rough terrain, up into burning forests. For up to two weeks at a stretch, they typically labor for 15 hour days, catching a few hours of sleep, a meal and showers at a base camp on the periphery before going back to fighting the fire. If they have to go deep into the woods, they'll reside in a "spike camp" not far from the flames, where they're on a diet of water and dehydrated military-style field provisions.

In an emergency situation, "you could work 36 hours straight if it's required," Barker says.

Barker, who spent 18 years as a volunteer fireman fighting structure fires before becoming a private firefighter, says that wildfires are a different animal than the sort of fires that urban and suburban dwellers are accustomed to seeing put out by their local fire crews. "A structure fire is in a box," he explains. "It's not going to move on you. It might extend to the house next door, but that takes time. A wildfire is not in a box, and when it extends, it does so rapidly." In California, where the wildfires were driven by 50- to 60-mile-per-hour (50- to 80-kilometer-per-hour) winds, flames could spread the equivalent of 60 football fields in a minute.

"This is what we're dealing with now — these large, complex fires," Barker says.

Private firefighters face the same health hazards that their government counterparts do, Barker says. While fighting a fire back in 2015, for example, he suffered carbon monoxide poisoning and briefly had to be hospitalized.

Barker said that like their public-sector counterparts, private firefighters are motivated more by duty than pay. "It's about protecting the public and serving your community," he explains.

Now That's Interesting
Unlike structure fires, wildfires are so big that it's not possible to extinguish them, Barker says. "With a 300,000-acre fire, you can't put water on it to put it out," he explains. Instead, firefighters try to control the fire and direct it away from homes and property, until it burns out or is quenched by rainfall.