From Prison to Peace Park, a Plan for Guantanamo

Browse the article From Prison to Peace Park, a Plan for Guantanamo 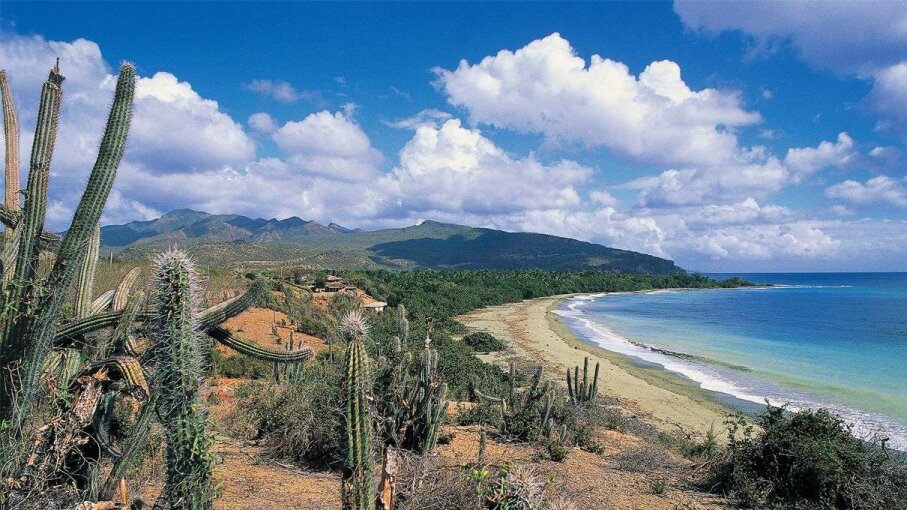 That stretch of coastline belongs to Guantanamo Province, Cuba. For U.S. folks, that shot may not be what people picture when they hear the name "Guantanamo." DeAgostini/Getty Images

If Joe Roman gets his wish, the rapidly improving relations between the U.S. and Cuba will prove to be the first steps toward the establishment of a scientific and geopolitical wonderland.

The conservation biologist from the University of Vermont envisions a peace park and marine research center where scientists from the U.S., Cuba and many other nations can study conservation and climate change, all the while promoting increased harmony between the countries. It will be a veritable model of bilateral bliss.

And it will stand smack-dab in the middle of what has been, for years, a symbol of the Cold War standoff between Cuba and America: Guantanamo Bay.

It's a pipe dream, to be sure. But Guantanamo Bay as a place of peace is an idea whose time may be now. On Sunday, President Obama will become only the second sitting U.S. president to visit Cuba, following Calvin Coolidge more than 88 years ago.

"The timing ... we got lucky, frankly," says Roman. He and James Kraska, a professor of law at the U.S. Naval War College, made their proposal for Guantanamo Bay in the March 18 edition of the journal Science, just days before Obama is scheduled to go to Havana.

Guantanamo Bay — or, specifically, Guantanamo Bay Naval Base — has been under U.S. control since the Americans leased the spot from the Cuban government in 1903. Their presence in Cuba goes further back than that, though. The U.S. first landed in Cuba in 1898, during the Spanish-American War. Americans have been there ever since.

The Cubans have long called for Guantanamo to be returned and for the U.S. to leave. In fact, the Cuban government has declined to cash the U.S. government's rent checks (currently $4,085 per year) for decades.

Meanwhile, the U.S. has made no move to abandon the base — and says it won't. It now uses some of Gitmo, as it is known, for the Guantanamo Bay detention camp. Some 91 terror suspects and combatants from the wars in Afghanistan, Iraq and elsewhere still are held there.

Roman and Kraska suggest their idea as an alternative to the stalemate.

"I see it as benefitting both the U.S. and Cuba, and at the same time benefitting other people in the Caribbean," Roman says. "Cuba is known as the ecological jewel of the Caribbean. That could be under threat as things change, as the country opens up. Here's a place where the U.S. could really help ..."

The move makes sense in other ways, Kraska argues. Obama has, for his entire presidency, tried to get the detention center at Guantanamo closed. And, as the Pentagon looks for ways to save money, shuttering the rest of the base at Guantanamo also could make financial sense.

Transforming the base into a bilateral "peace park" — Roman cites the Waterton-Glacier International Peace Park, established in 1932 between Canada and the U.S., as an example of how it can be done — could help preserve the vast coral reefs, shorelines, mangrove wetlands and fisheries throughout Guantanamo.

The U.S. and Cuba already are cooperating in scientific studies, thanks to the re-opening of relations. Last November, the two countries signed an agreement establishing sister sanctuaries, including the Florida Keys National Marine Sanctuary and Guanahacabibes National Park on the west coast of Cuba.

What Are the Chances?

Despite the thawing of relations, Roman and Kraska's idea will not be easy to sell. Some in power disagree with the new relations with Cuba. Some do not want to relinquish control of Guantanamo.

Still, Roman and his colleagues plan to make their pitch.

"We're getting in touch with Congressional staffers in order to present this idea to them. It's going to need Congress; it's going to need the administration, to move this forward," Roman said. "So we've reached out to the White House as well as members of Congress. They're going to make the ultimate decision as to which way this is going to go — as are the Cubans."

Earlier this week, Roman returned from a trip to Cuba. What he saw gave him hope for his idea.

"People are very excited about Obama's visit. They're painting the streets, they're cleaning up the city, there's all this talk about where he's going and what he's going to be doing while he's there," Roman says. "People in Cuba are absolutely very excited about the changes that are occurring in their country. And I think a lot of Americans are, too. There are a lot of Americans living in the country, too. You can see the excitement on both sides. It's palpable."

Whether that will translate into realizing the dream of a peace park in a place known for its heavy-handed military history and its notorious prison camp is still to be seen.

"I don't know what the chances are," Roman says. "Let's say, 'hopeful' that this will be one good path forward for Guantanamo. But it's too soon to tell."

NOW THAT’S COOL
Abandoning a military base to other, loftier purposes is not unprecedented. The U.S. Army South headquarters in Panama City, what was once Fort Clayton, was ceded to the government of Panama in 1999. It is now Ciudad del Saber, which translates to City of Knowledge. It houses government-sponsored companies and organizations that use education, technology and innovation in promoting an ecologically sustainable way of life.