The Pardon as a Political Tool 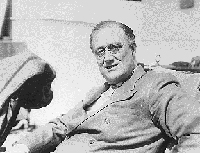 Franklin D. Roosevelt issued 3,687 pardons in his three terms, the most ever issued by an American president.
Courtesy of the National Archives

In the era following the 1950s, the pardon power evolved into a broader interpretation, eventually becoming a political tool. If a president feels that Congress has passed overly harsh penalties for breaking a law, he can use the pardon power to thwart the law. The best example of this is President John F. Kennedy's pardoning of those who were convicted of crimes under the Narcotics Act of 1956. Under this law, Congress passed harsh mandatory minimum sentences for drug offenses. As a result, a large number of first-time offenders found themselves in prison for five or more years. Kennedy pardoned these people, in effect overturning much of the law passed by Congress.

Using the blanket pardon as Kennedy did allowed hundreds, if not thousands, to be released from prison. But all of these people were pardoned for the same offense. What about the thousands of different and unique applications for pardons that are filled out each year? To see to it that each is evaluated on its own merits, the president has always needed guidance.

An 1893 law gave the power to review and make recommendations to the president on pardons to the Department of Justice. In 1981, another law created the Office of the Pardon Attorney. This office, a branch of the Department of Justice, is dedicated exclusively to making determinations on petitions for pardons. However, the ultimate decision is left up to the president.

The Pardon Attorney is charged with accepting all pardon applications and investigating them to determine their value. The Pardon Attorney and his office may speak to local or state officials familiar with each case to get a better understanding of the circumstances surrounding the conviction. They also check into the applicant's character and post-conviction history. Did he attempt to make amends for his crime? Has he made an effort to lead an exemplary life since his conviction? Factors like these and others are included in the Pardon Attorney's decision to recommend a pardon be granted to the petitioner.

The president who granted the highest percentage of the pardons that came across his desk was Harry Truman, at 42 percent. Truman granted a total of 2,044 acts of clemency during his two terms as president [Source: U.S. Department of Justice].

President Jimmy Carter granted a blanket pardon to draft-dodgers during the Vietnam War.
Courtesy of the National Archives

The two presidents who had the least number of pardons are James Garfield and William Henry Harrison, both with no pardons to their names. Garfield was assassinated after holding office less than a year and Harrison died of pneumonia just under a month after he took office.

What about some of our recent presidents? Jimmy Carter issued 566. Ronald Reagan issued 406, and Bill Clinton issued 456 pardons. At the beginning of his second term, George W. Bush had issued 31 pardons [Source: History News Network]. As of June 2007, the number increased to 113 [Source: Bloomberg].This is similar to his father, George H. W. Bush, who granted only 77 pardons in his four-year term as president.

For more information on pardons and related topics, check out the links below.