The Origins of the Pardon 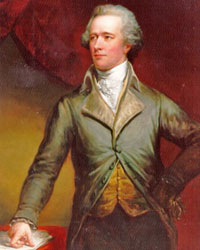 Alexander Hamilton recognized the value in using pardoning power as tool to govern with.
Courtesy of the U.S. Department of Treasury

The pardon is based on the royal Prerogative of English Kings, which gave the king the ability to overturn any sentence. Originally, the king's prerogative existed without any limitations attached to it. But during the reign of King Charles II (1660-85), the English Parliament managed to institute the single rule that impeachment was excluded from the pardon power. This rule lives on today.

When the American founders were developing the laws for the United States in the late 18th century, the power to pardon almost didn't make it into the Constitution. In fact, it was barely considered. Two plans, the Virginia Plan and the New Jersey Plan for framing the Constitution, did not include the power to pardon. One of the Virginia Plan's backers, George Mason, believed it was a mistake to grant such power to a single person. Having just revolted against King George III, whom many Americans considered a tyrannical king, many of Mason's fellow framers agreed with him.

But Alexander Hamilton, who believed in a large, powerful, centralized federal government made up of the elite thinkers of the nation, was able to bring the other framers of the U.S. Constitution around to his way of thinking.

In No. 74 of his "Federalist Papers," Alexander Hamilton extolled the value of a pardoning power: "in seasons of insurrection or rebellion, there are often critical moments, when a welltimed [sic] offer of pardon to the insurgents or rebels may restore the tranquillity [sic] of the commonwealth; and which, if suffered to pass unimproved, it may never be possible afterwards to recall" [Source: Yale Law School].

Hamilton, and eventually the other framers, saw the value of investing in the president the ability to -- at a moment's notice and without the consent of any other branch of government -- grant reprieves to groups during periods of national crisis. It was reasoned that some crises could be allayed or overcome if the belligerents could be given a deal forgiving them for their trespasses.

Almost no sooner than the ink on the Constitution was dry, this ability was needed. When farmers in Pennsylvania revolted in 1794 against federal taxes levied on their corn crops, the Whiskey Rebellion was born. President George Washington used the power to pardon for the first time in United States history to forgive the revolting farmers for their insurrection against the young nation. The action worked and the rebellion was quieted.

The pardon has since been used in this original intent several times. As mentioned earlier, Andrew Johnson used the pardon to redeem Confederate soldiers after the Civil War. President John Adams pardoned soldiers who had deserted during the Revolutionary War. And to help end the Vietnam era, President Jimmy Carter offered a blanket pardon to any American who had dodged the draft during the war.

As the centuries have progressed in America, the presidential pardon has evolved from the ability to forgive treasonous acts, to a much broader interpretation of executive power. Check out the next page to learn how the pardon is being used in the modern era.