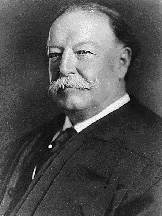 Former president William Howard Taft, who later became Chief Justice of the Supreme Court, ruled on a case that decided the pardon power did not apply to cases of court contempt.
Courtesy of National Archives

The United States Federal Government was purposely separated into three distinct entities: legislative, executive and judicial. Under this arrangement, each branch is given the ability to check and balance the other so that no branch becomes more powerful than the other. This is called "separation of powers," and it's the basis of American government. It applies in all cases, save one -- the presidential pardon.

When the president issues a legitimate pardon it is, legally speaking, irrefutable. Short of generating bad press against a president, there is nothing Congress can do to block or even review a pardon. But how does this sit with Congress?

There have been cases where Congress has considered introducing bills that limit the president's pardon power or allow oversight of pardons. Every last one of these bills failed. Why? Because the president's power to pardon is guaranteed by the Constitution -- it's in the actual original document, not just the Bill of Rights. Plus, it's a long-standing and time-honored traditional power granted to the leader of a country, and a useful one, as we will see. Finally, the judicial branch, viewing the pardon power as a part of the Constitution has served to protect it more often than not [Source: Shanor and Miller].

In the 1974 case, Schick v. Reed (419 U.S. 256), the Supreme Court decreed that "the pardoning power is an enumerated power of the Constitution and that its limitations, if any, must be found in the Constitution itself" [Source: Justia].

The pardon gives the president an extra check on the judiciary and congress, a check that neither of the other branches has. This makes the pardon a particularly useful tool when the White House and Congress are at odds with one another. If members of the president's administration are called to testify before Congress, they may have no reason to cooperate or help Congress discover facts in a congressional investigation into the executive branch. This is because even if a staffer refuses to speak with Congress and is arrested for it, the president can immediately grant the staffer a pardon. It's like playing tic-tac-toe, with the executive branch inevitably winning every time.

But Congress does have one relief from the president's power to pardon. Ironically, this relief was first elucidated by a former president.

Ex parte Grossman was a 1924 case that was heard by a Supreme Court lead by Chief Justice William Taft, who had left the White House just 11 years before. In the majority opinion, Taft said that the court's ability to charge its witnesses in contempt existed outside the president's ability to pardon [Source:Cornell University Law School].

Congress, like the courts, has the power to compel witnesses to testify before them. Should any witness refuse, Congress is granted the power to hold these witnesses in contempt. By proxy, the power granted to Congress to hold in contempt anyone who refuses to testify also exists outside the pardoning power. This means, that if the executive branch orders any of its administration not to testify before the legislative branch, Congress may hold that person in contempt, without the possibility of that witness being granted a pardon. In this manner, witnesses are more likely to cooperate with Congress, especially in cases where the executive branch is being investigated.

While the essential rules governing the power remain static, the customs surrounding the power grow, develop, fall off and are replaced by others. In the next section, we'll look at the origins of the presidential pardon.

Who granted the most pardons?

That award goes to our 32nd president, Franklin D. Roosevelt. At 3,687 pardons granted, Roosevelt is the No.1 granter of pardons by more than 1,000 pardons. Remember, though, Roosevelt is the only president to serve three terms. It should be pointed out that Franklin Roosevelt granted pardons for just 28 percent of the petitions he received while in office [Source:Ruckman]. Still, that’s a lot of pardons.