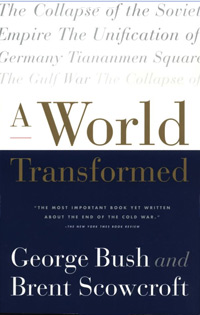 Lyndon B. Johnson takes a more abbreviated tack on retelling the tale of his term in office. His memoir, "The Vantage Point: Perspectives of the Presidency, 1963-1969," fills only one volume. Johnson is very straightforward about the nature of his memoir and why and how he formats it the way he does. He informs the reader that this is not a "definitive history of his Presidency" -- that it is merely a review of his term from his own vantage point:

... I have tried to avoid engaging in historical pamphleteering. I did not set out to write a propaganda piece in support of my decisions. My purpose has been to state the problems that I faced as President, to record the facts as they came to me, to list the alternatives available, and to review what I did and why I did it.

Many presidents acknowledge the help of others in creating their memoirs, but very few share author credit with another writer. In "A World Transformed," former President George Bush goes against convention in two ways. Not only does he share top billing with former National Security Advisor Brent Scowcroft, but together the two discuss only a portion of Bush's presidency -- limiting their coverage to 1989 through 1991.

While Bush didn't create a complete memoir of his presidency, the work "All the Best, George Bush: My Life in Letters and Other Writings" -- composed primarily of excerpts from his diaries, letters and other correspondence -- stands in well for a memoir of the autobiographical vein. Let's take a look at some other presidential writings of this sort.