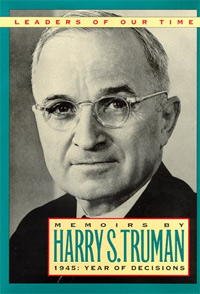 Because so few have written memoirs, it's interesting that the thirty-third, thirty-fourth and thirty-sixth presidents of the United States (Truman, Eisenhower, and Johnson) all chose to do so. Truman, Eisenhower, and Johnson all chose a similar format -- writing memoirs that specifically deal with the time of their presidencies. (One can only wonder what the thirty-fifth president -- John Fitzgerald Kennedy -- would have done were he given the opportunity.)

In the preface to both books (it's identical), Truman actually comments on the dearth of presidential memoirs:

I have often thought in reading the history of our country how much is lost to us because so few of our Presidents have told their own stories. It would have been helpful for us to know more of what was in their minds and what impelled them to do what they did.

Ironically, former President Herbert Hoover made a similar observation in the preface to his memoir. Could it be that Truman read Hoover's memoir prior to writing his own? Quite possibly: Several presidents have made reference to reading the works of their predecessors prior to taking pen in hand -- Bill Clinton not withstanding. In fact, it has been reported that, prior to writing his memoir "My Life," Clinton read all of the former presidents' memoirs.

Eisenhower also presented his memoir in a two-volume set:

Both Truman's and Eisenhower's memoirs are very detailed. Stylistically though, Eisenhower's memoir is a bit different: With a slight novel-like feel, the volumes are broken down into broad sections that he calls "books," each with several chapters. Each book begins with two or three quotes, usually some text from a speech given by Eisenhower himself and then a quote or two from another famous politician or former president.

...if anything here -- the story of a lesson learned, a principle proved, or an old truth emphasized -- should be found of value by those who in years to come will bear responsibilities in the federal government, all of us who served this nation in my administration will be deeply rewarded.