Browse the article Can the 2020 U.S. Presidential Election Be Postponed? 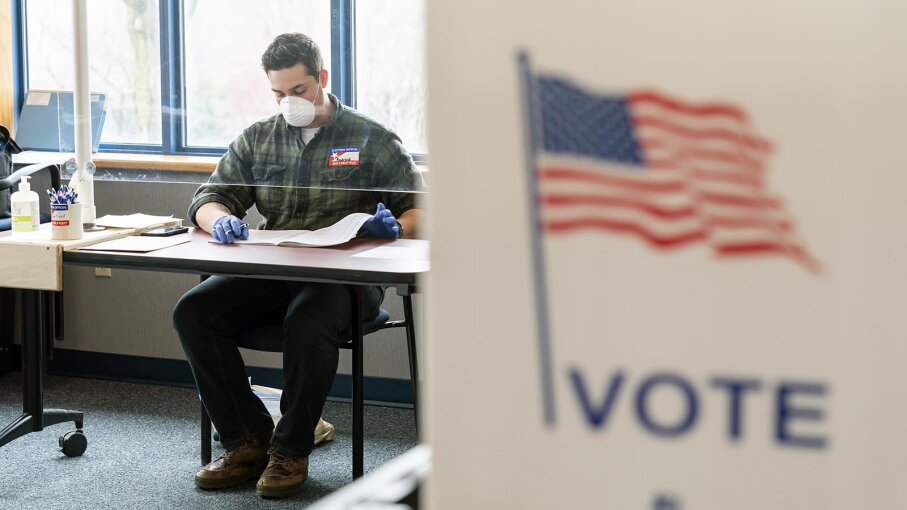 A National Guard member works on election day at a polling location on April 7, 2020 in Madison, Wisconsin. Residents there were forced to go to the polls a day after the U.S. Supreme Court voted against an extension of the absentee ballot deadline in the state. Andy Manis/Getty Images

The coronavirus, in less than three months, has upended every facet of American life. And it's not close to done yet. The pandemic's shockwaves will rumble on for months. Possibly years even.

But if you're thinking that the virus is enough to shake one of the bedrocks of American democracy — the election of a president — well, you'd better brush up on the U.S. Constitution.

No way the November election gets scrapped. Almost no way it's delayed, either.

"We are, I believe, the only major long-running democracy that has never postponed an election, even during wartime," says Richard Pildes, a constitutional scholar and law professor at New York University. "I would say the context that might have most dramatically raised the issue was the 1864 election that was held in the midst of the Civil War which, of course, was a war that completely consumed the country."

If a war that threatened the very existence of the country couldn't stop the general election, it's not likely that the coronavirus will, either. We have the framers of the Constitution to thank for that.

Why It's So Hard to Bump an Election

But the date for a U.S. presidential election is fixed, by law, and can only be changed by law. That alone makes it almost impossible to delay a national election. Think about it: Lawmakers can't agree on anything these days. So it's highly unlikely they'll come together to put off the presidential election.

Equally important, the Constitution states a firm date that a sitting president's term must end. From the Congressional Research Service:

Under the Twentieth Amendment, the incumbent President's term ends at noon on January 20th. There are no provisions of law permitting a President to stay in office after this date, even in the event of a national emergency, short of the ratification of a new constitutional amendment.

By law, then, an election must be held on a certain date because, by law, the president has to vacate the Oval Office Jan. 20. Unless he (or someday she) is reelected.

And to be reelected, the country has to hold an election. Follow?

Still ... what if something truly terrible happens on the brink of an election? Say an attack on the country, a cyber-attack on voting measures or a major natural disaster?

Well, the election could be delayed — the date still would have to be changed by law, and again, that's a steep hill to climb — but the date can't be delayed a lot. Votes still have to be counted, which takes time. Electors to the Electoral College have to be picked and their votes have to be registered. And the Constitution still says the sitting president must skedaddle by Jan. 20.

And so it is that the U.S. — even through a Civil War, domestic terrorism, the pandemic of 1918, and many other tragedies — never has postponed a presidential election.

Some Ohio residents were able to cast their votes in person for the primary election, which had been postponed on March 17, including those who are disabled, those without a permanent residence or those who requested a ballot by mail but never received it. Most however, had to vote via absentee ballot.
Matthew Hatcher/Getty Images

Still let's take a worst-case scenario. What if the country is so messed up, by the coronavirus or something else, something much worse even than the Civil War, that the election is endangered, and the country stands on the precipice of disaster? Can't the sitting president declare martial law or use his emergency powers to delay or call off the election? Executive order? Fiat?

"The president doesn't have any power to postpone the Election Day on his own," Pildes says. "You can never anticipate what kind of argument people might decide to make when it's in their interest to make the argument. But I'm sure that this is a no-brainer in terms of any legal advice the president would get. The president would be told, 'You don't have the power to do that.'"

What happens if a law is enacted to delay the election — again, not easy — but it doesn't happen before the president's term expires? The president's term, by law, still ends Jan. 20. If states can't deliver a verdict from their Electoral College reps (they do the actual voting for the president) in time, the whole mess falls into the lap of the Congress. In that scenario, the House is supposed to pick the new president and the Senate the VP.

Another wrinkle: If a national election is postponed beyond a certain point, there won't be a House, either. (All Representatives, remember, have to be elected every two years. No election, no House.) In that case, it falls to the Senate to pick the president because the Senate is a "continuing body;" two-thirds of its members are always sitting, with staggered elections only every six years. If none of that works, the selection of the president reverts to the rules of succession: the Speaker of the House (if there is one) will act as president and, if not him (or her), the Senate's President pro tempore assumes the acting gig. This has never happened.

Wisconsin allowed curbside voting on April 7, 2020 because of the coronavirus. Is this something we can expect in the upcoming presidential election?
Andy Manis/Getty Images

How the Virus May Change This Election

Less difficult than changing the date of the election is changing how it's held. That's not to say that holding a presidential election in the time of coronavirus won't be extremely challenging. It will be.

Absentee ballots, mail-in ballots and changes in polling places all are in play. Early voting. New ways of registering to vote. And all this in the first U.S. presidential election after Russia interfered with the last one.

"There's no question that we are in the middle of a process right now in which state legislatures and governors are going to inevitably be making various changes to the election process for this fall. The exact changes may vary from state to state. But there's no question we are going to have a lot of things happen this fall that don't typically happen," Pildes says.

"We understand the circumstances we're in. We don't know exactly how bad they'll be or not be ... But this is a massive transformation that has to be made almost overnight, and whenever something like that happens, it's almost inevitable that there are going to be some gaps or glitches or problems emerge. We should be doing everything now to try to minimize those risks. But the risks are real and unavoidable when you're trying to transform something as complicated as how people vote."

NOW THAT'S INTERESTING
During the Civil War, 20 northern states changed their laws to allow soldiers to cast absentee ballots from military camps. Before these statutes were enacted, state laws required in-person voting. Today all 50 states allow for absentee voting by any registered voter.