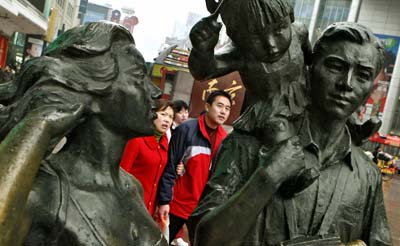 A Chinese couple walks toward a statue of a model one child family on the Nanjing Rd shopping area of Shanghai. China will focus on correcting a potentially destabilizing gender imbalance over the coming years.
MARK RALSTON/AFP/Getty Images

What happens when we reach carrying capacity in an area? There are several options:

­Humans are ­also capable of voluntarily controlling their own populations. This can occur on a large scale, like a ­government program or law, or at the individual level. Individuals have had far greater access to birth control since the 1960s. Governments can control populations by enforcing penalties for having too many children, by making it more advantageous to have fewer children, or by sterilizing people so they're unable to reproduce. Unfortunately, some governments have attempted to reduce or eliminate certain populations they view as undesirable by killing them off en masse -- this is known as genocide.

Since the 1970s, China has had an official policy forbidding most couples to have more than one child. Faced with tremendous population pressure, China levies hefty fines against anyone who violates the rule. The policy can be said to have achieved its goal, preventing an estimated 250 million births [source: BBC].

There are negative side effects, however. A cultural and religious preference for male children has led to abortions of many female fetuses, which in turn has led to a growing imbalance in China's male-to-female ratio. Shrinking populations in some areas have also caused economic problems. Dissidents and defectors claim that China engages in brutal human rights violations in the enforcement of the One-Child Policy [source: CNN].

Most populous country as of 2006: China