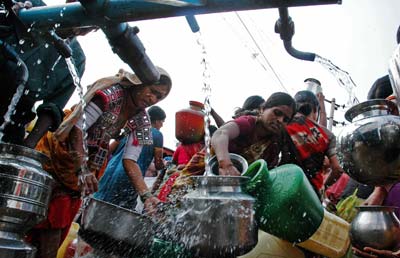 Indian women fill their containers with drinking water from the mobile water tankers in Hyderabad. India's huge and growing population is putting a severe strain on all of the country's natural resources.
NOAH SEELAM/AFP/Getty Images

As a population grows, it's put under pressure. This pressure can come from a lack of resources to feed, house and provide services; disease; war; or lack of enough space. The pressure can be relieved by migration. Wars, diseases and famine also reduce the pressure by killing off a portion of the population. In fact, the basis for Thomas Malthus' famous population theories is that human population will inevitably grow beyond the ability of the Earth to sustain it, resulting in self-correcting (and unpleasant) pressures.

Malthus' idea is sometimes known as "the Population Bomb" (or Malthusian Population Theory), and it gained popularity with the growth of the environmental movement in the 1970s. Fears of worldwide overpopulation are based on several factors:

Our vulnerability to these factors is bas­ed on population density, the number of humans per unit of area. Since the Industrial Revolution, urbanization has caused a tremendous increase in population density in cities. The highest population density ever probably occurred in the Kowloon Walled City area of Hong Kong. At one point, about 50,000 people lived in a megablock that was about 150 meters by 200 meters in area [source: Tofu Magazine]. The virtually lawless district was evacuated and torn down to make way for a park. Today, the areas of greatest population density are obviously in major urban areas. India and China have large areas of intensely high population density [source: NASA Visible Earth].

As population density in a given area increases, it approaches what's known as the carrying capacity. This is the maximum number of humans an area is capable of supporting in terms of available resources. For animals, this is easy to calculate. A goat, for example, might need 50 square yards of grass to survive. An area of 200 square yards therefore has a carrying capacity of four goats. Calculating carrying capacity for humans is much more complex. We can use technology to improve our resource production. We can ship in resources from other areas. We can create sanitation systems and other infrastructure to support higher density.

In the 12th and 13th centuries, the era of the plague killed an estimated 20 to 30 million people in Europe alone. Some cities were almost completely wiped out [source: AVMA, Knox]. Historians suspect an earlier plague that occurred in the 5th century (the Plague of Justinian) may have killed off 100 million people -- half the world's population at that time [source: Bishop].