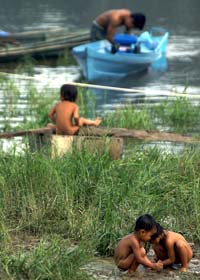 Some 30 ethnic groups live in Borneo, making the population of this island one of the most variegated of human social groups.
BAY ISMOYO/AFP/Getty Images

The human population has increased almost continually throughout history. Since no solid records exist for most historical periods, scholars have to estimate worldwide populations based on whatever demographic information they can piece together. In 10,000 B.C., there were between one and 10 million humans. By 1,000 B.C. there were 50 million. In A.D. 600, worldwide population had reached 200 million. At the dawn of the 20th century, 1.5 billion humans lived on the planet [source: Historical Estimates of World Population].

Our population seems to increase with greater and greater speed as the centuries go on. The primary reason for this is simple -- each increase in population creates more people able to reproduce. Population grows exponentially. If one million people have enough children to double the population (taking into account mortality rates), then the next generation will have twice as many giving birth to children. Doubling the population then results in four million people. This is sometimes known as the Malthusian Growth Model, named after one of the earliest researchers of population, Thomas Malthus.

So it should come as no surprise that in the 100 years between 1900 and 2000, the world's population quadrupled, topping six billion. The U.S. Census Bureau projects that it will exceed 10 billion by 2050 [source: World Population Information].

­The more or less steady climb of human population is interspersed at various points with spikes (sudden, rapid jumps in the rate of increase that eventually level off) and bottlenecks, sudden drops in total population.

Worldwide population spikes in the past can only be estimated due to incomplete historical records, but evidence of sudden population growth coincides with the discovery of tools, the domestication of food crops and the Industrial Revolution. Each of these major changes in the way humans lived their lives resulted in a vastly increased capacity to produce food, goods or labor. They also freed up some people to take on specialized jobs and improved the overall quality of life. These conditions allowed humans to flourish and increase their populations. Generally speaking, periods of increased population growth coincide with periods of prosperity.

­Plagues and some wars represent population bottlenecks, also known as genetic bottlenecks. When the population suddenly and dramatically drops, a limited number of humans are able to continue reproducing. Although the population ultimately rebounds and grows beyond its pre-bottleneck levels, every human who is subsequently born can trace his lineage directly to one of the handful of reproducers in the bottleneck. This greatly limits genetic diversity.