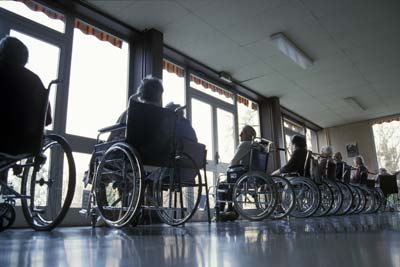 Elderly residents at the Pavilion Schutzenberger in Strasbourg, France. European countries and Japan will face the highest aging trends in the developed world between now and 2050.
Patrick Landmann/Getty Images

There's a lot more to know about populations than just how many people there are.

Age - The age of a population can tell us a lot about what the population is doing, as well as what it will be doing in the future. A sudden increase in the birth rate (such as the post-World War II "Baby Boom" in the United States) creates a "bulge" in the population. A larger than normal percentage of the population is then concentrated into a certain age group. As those people age, the bulge moves through the population and can have enormous societal effects. As Baby Boomers moved into middle age and started their own families, their tremendous purchasing power helped fuel the U.S. economy. As they move into old age, they will exert immense pressure on the health care industry and Social Security.

Location - Finding out where people live is one of the biggest reasons the United States conducts its census. Legislators in the House of Representatives are allocated to each state based on that state's population. Many government programs base their funding on population patterns as well. Location data also tells us about the movement of people. U.S. census data shows that Americans have been moving less and less often since the 1940s and that in the last 15 to 20 years, Americans have been moving away from the Northeast and into the Southeast [source: Population Estimates, Census 2000 Special Reports].

­Race - The demographic study of race is very controversial. Scientifically, there's no such thing as different "races" of human beings. The difference between Asian people and black people is the same as the difference between people with brown eyes and people with blue eyes. However, the idea of race still plays an important role in our societies. Many of us self-identify as being part of a certain race for cultural reasons. Demographers can study racial populations for information on issues that might be emphasized within a racial group, such as a medical problem. The U.S. Census Bureau explains the race data they collect as "generally reflect[ing] a social definition of race recognized in this country. They do not conform to any biological, anthropological, or genetic criteria" [source: U.S. Census Bureau Question and Answer Center].