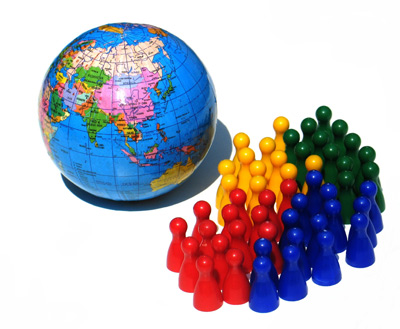 The population continues to grow and is expected to reach 7 billion by 2015.
Lusi, SXC

Less than three months before the dawn of the 21st century, planet Earth welcomed its 6 billionth inhabitant. Shortly after midnight in Sarajevo, Bosnia, Fatima Nevic gave birth to a historic 8-pound boy. The United Nations Population Fund designated this October Tuesday as the approximate day that the world's 6 billionth child would be born, and the Bosnian baby was greeted by U.N. Secretary General Kofi Annan and officially recognized as the special one. The UNFPA proclaimed it "The Day of 6 Billion," or "D6B." While the occasion was only approximate, it generated worldwide discussion concerning population growth and the staggering predictions for the future.

The Day of 6 Billion came only 80 days before the year 2000, providing excellent comparisons to past populations. In only 40 years, the world population had doubled. In 100 years, it had quadrupled. In only 12 years, it had increased by one billion. Median projections for population growth estimated that by the year 2050, the tally would top 9 billion, with an increase of roughly 77 million people per year. UNFPA statistics released in September 1999 also stated that the child had a less than 1 in 10 chance of being born into "relative prosperity," and a 3 in 10 chance of being born into "extreme poverty."

Critics pointed to alarming trends in population growth that indicated the world was not ready for a 50 percent population increase in the half century to come. The 30 percent estimated chance that the 6 billionth child would come from an indigent family reflected uneven global statistics. While growth had stopped on the soil of developed countries, it continued in the underdeveloped; the population was increasing in the places that could least afford it. Nations that had trouble providing food and sanitation in the 20th century would find it even harder with the growing numbers, they said. In a world where the gap between the rich and poor was greater than ever, (the richest 20 percent of humanity was said to have 82 times the income of the poorest 20 percent), the population increase was bottom-heavy.

Others chose to look at the positives that came with the milestone, arguing that as the population had increased, so too did the quality of life. A population increase also meant an aging population, and an aging population was the product of lower child mortality rates. An emphasis on education led to lower fertility rates, particularly in developed countries, where fewer children often meant fewer health problems for families. Fertility rates were down from the 1960s on all continents, though the decrease was sharper on continents such as North America and Asia than in Africa. Many attributed this to progress and education in reproductive rights, particularly in a woman's right to choose if and when she has children. Death rates were also lower, thanks to better health care and nutrition. Despite the disagreements in population statistics, everyone agreed that resolving social, economic and environmental issues would be crucial with population increase into the new century. And, for those of you hoping to contribute to the 7 billionth child? You still have time: That lucky baby isn't expected to be born until around 2015.