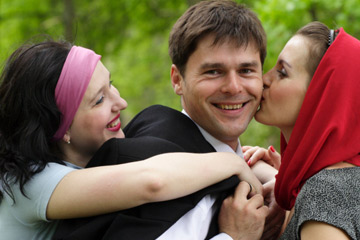 It's important that a man's two girlfriends get along -- if they're not involved themselves.
iStockphoto/Thinkstock

Polyamory involves a lot of talking -- so much so that "communicate, communicate, communicate" is considered one of the core tenets of polyamory. Though it might seem like polyamory is a bit of a free-for-all, it can actually involve a lot of ground rules. Remember, everyone has to know what everyone else is up to when it comes to carrying on outside relationships, which involves a lot of conversation (as well as, possibly, a conversation about how much detail you want about what your partner is doing with other people). There's also negotiating boundaries to ensure that each relationship receives ample time; for example, a woman may request that her husband only spend three nights a week with his other girlfriend. New partners usually have to meet with already-existing partners and get their approval (or at least avoid a veto; the power to nix a potential partner is usually the right of someone already in the relationship). All couples face questions of where to live and how to allocate resources, but talks get more intense with so many players involved.

Sex also comes with a lot of guidelines, so that everyone avoids sexually transmitted diseases. A married couple, for example, may be body fluid monogamous -- meaning that they exchange body fluids without the protection of a condom -- but they may have a rule that a condom must be used in encounters with other sexual partners. There may also be rules about how often someone must be tested for STDs in order to remain in the relationship.

Along with communication skills, good scheduling abilities are also essential to the polyamory lifestyle. Shared online calendars, such as the one provided by Google, can be vital to remembering which girlfriend has a work event and which one needs to be at her son's school. It might be disappointing for someone if their boyfriend can't come to dinner on a night when he's already scheduled to be with another partner, but again, talking about these kinds of issues and feelings is expected -- especially when the feeling at hand is jealousy.

Jealousy, worry or insecurity about your standing with someone you love is a universal emotion, and the chances for it are multiplied infinitely when you know that your partner is sleeping with someone else. And even though polyamorists know what they're getting into, they're not exempt from experiencing the green-eyed monster. However, rather than use a feeling of jealousy to fly off the handle, polyamorists try to assess themselves and communicate with their partners to figure out what the true issue is, and how it can be resolved.

Does this seem like a lot of work? It can be. So why choose this lifestyle? We'll explore some of the benefits of polyamory on the next page.