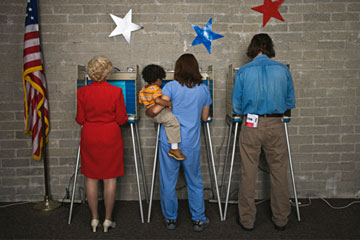 Do parents pass down their political views to their children? See election memorabilia pictures.
Jupiterimages/Getty Images

In the mid-2000s, a new word entered the academic lexicon: genopolitics. Not to be confused with "geopolitics," the contemporary buzzword referring to the big-picture intersection of politics, geography and economics, genopolitics speaks to politics on the individual level [source: Biuso]. Defined as the influence of people's genes on their political attitudes and habits, the term heralded a novel -- and controversial -- phase in political science, which until then, had been much more intimately associated with sociology rather than biology.

Prior to the 21st century, much of the research into why and how people vote focused on nurture, rather than nature. In the 1950s and 1960s, for instance, sociologists widely agreed that people's politics often fell in lockstep with their parents' [source: Tedin]. In the following decades, that environmental explanation would broaden to include a number of other variables, such as socioeconomics, education, peer pressure, age and gender. Even still, the parent-child relationship remained central to the understanding of how political affiliations are formed [source: Fowler, Baker and Dawes].

But while nurture, or how a person is raised, undoubtedly plays a pivotal role in shaping political viewpoints, the extant research had largely ignored the nature side of the equation. That is, until genopolitics came along and offered a glimpse into how much people's genes determine whether they swing liberal or conservative, Republican or Democrat. In 2005, acknowledging that the idea of inborn political ideologies would strike many colleagues as "far-fetched, odd, even perverse," a trio of political scientists published a groundbreaking study in the American Political Science Review suggesting that behavioral genetics in fact makes a significant impact at the polls [source: Alford, Funk and Hibbing].

The team compared survey data assessing political and social outlooks from pairs of fraternal and identical twins and compared how closely their responses aligned. Affirming the study hypothesis, the identical twins who shared 100 percent of their DNA saw more eye-to-eye compared to the fraternal twins who share only half their genes. By the researchers' calculations, genetics is 53 percent responsible for stances on social issues and 14 percent responsible for the political party alignment [source: Carey].

For the first time, scientific literature supported the notion that politics run in the family, not only in terms of socialization and values, but also in the genes passed along from parents to children. And thus genopolitics was born.