Browse the article 4 Times Politicians Have Gotten in Physical Fights 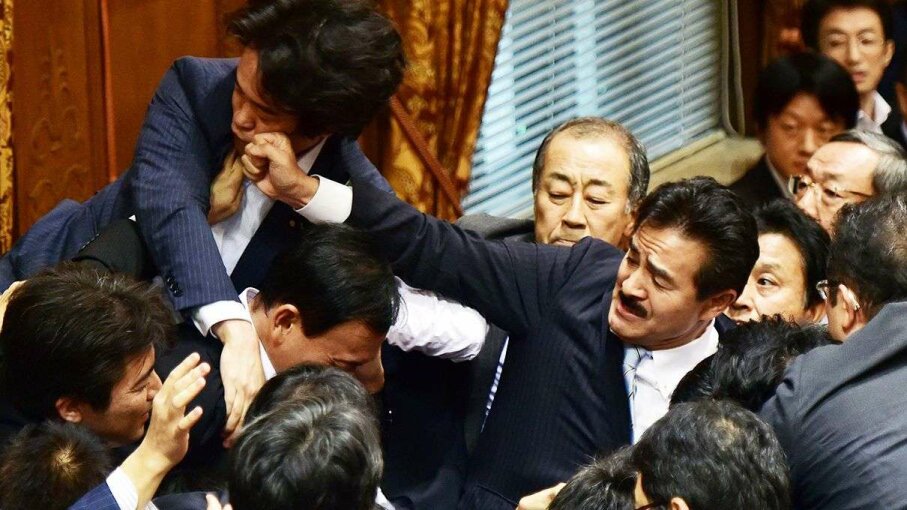 Politics is a tough, nasty business. Perhaps it's no surprise that things can get a little testy when you put a bunch of impassioned leaders with different ideas about how a government should run in the same room. Lawmakers are often called on to make decisions that can impact the health, safety and financial well-being of the people they represent. But physical fights aren't something relegated to the days of famous duels. Sometimes even today our representatives decide to sharpen their elbows and let a few haymakers fly.

And sadly enough, these examples of politicians turning to physical standoffs to try to settle their disputes all come from the past year alone:

Think the first round of Trump vs. Clinton got a little crabby? Check out the video at the top of this article and look what happened when a local TV station in Georgia put two candidates for parliament together at the same table. The trouble started when Polad Khalikov called opponent Vepkhia Gurgenishvili "scum" and Gurgenishvili responded by hurling a pen at Khalikov. It escalated into what looks like a brief slap fight that briefly involved the host, all while the cameras kept rolling.

Japanese ruling and opposition lawmakers scuffle at the Upper House's ad hoc committee session for the controversial security bills at the National Diet in Tokyo on Sept. 17, 2015.
Yoshikazu Tsuno/AFP/Getty Images

When Japan's parliament convened in September 2015, members were supposed to debate a military measure that some critics said would end 70 years of pacifism on the Pacific island nation. Instead, lawmakers took off the gloves and scrapped physically on the parliament floor. One fella found out personally what the five fingers said to the face when he leapt into a pile of lawmakers pushing and pulling over the printed version of the legislation. And this wasn't some gents-only scuffle; even a few female lawmakers got in on the action.

2. Ukraine in the Membrane?

Ukrainians find themselves in something of a tug of war these days, with Mother Russia pulling in one direction and the European Union the other. The country is also home to some of the world's best heavyweight boxers. Maybe it was the stress, or maybe it was some innate pugilistic spiritual awakening. Whatever it was, Ukrainian parliament members erupted into an all-out brawlin December 2015 after some lawmakers called on Prime Minister Arseniy Yatsenyuk to resign in the face of corruption allegations. (Yatsenyuk left office some four months later.)

Members of the state legislature in Indian-administered Kashmir scuffle in the assembly building in Srinagar on Oct. 5, 2015.
Tauseef Mustafa/AFP/Getty Images

In late 2015, a number of politicians in the Kashmir region had a real beef over a ban on beef. But then again, India's legislative chamber has long been known as a place where policy discussions can quickly devolve into a slugfest. Another recent example of just how much a meeting of parliament can turn into a pro wrestling match features flying fists, shoes, chairs, microphones and just about anything else the combatants could get their hands on is in this 2008 video below. Who said politicians aren't resourceful?

Now That's Interesting
The Sicilian Parliament, which convened in Italy in 1097, is believed to be one of mankind's first lawmaking bodies.