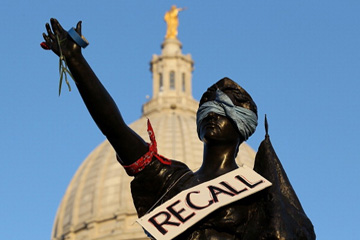 A sign touting the recall of Wisconsin governor Scott Walker hangs on a statue in front of the state capitol building in Madison in March 2011, amid protests against Walker's bill denying collective bargaining rights to public workers.
Justin Sullivan/Getty Images

Each state writes its own recall rules, but there are generally four steps to political recalls:

In the first step, an individual or group applies for permission to circulate a recall petition. Only eight states require specific grounds for a recall, like neglect of duty, misuse of office, or criminal conviction [source: National Conference of State Legislators]. In most states, the grounds for a recall can be strictly political in nature. In Wisconsin, voters disagreed with the governor's position on unions and collective bargaining. In the small town of Johnstown, Colo., residents disagreed with the mayor's plan to change the downtown street parking from diagonal to parallel [source: Cochran].

If state election officials approve the application, then the recall organizers must collect a lot of signatures in a short amount of time. Again, each state has its own rules, but most of the signature requirements are based on recent voter turnout. In Wisconsin, for example, recall supporters must collect 25 percent of the total number of people who voted in the last election for that office. And they must do it in 60 days or less [source: Tate]. One of the reasons that recalls are most often used on the local level is that local elections have a much lower voter turnout, requiring a relatively small number of signatures to trigger a recall.

Once the petitions are submitted, state election officials must verify each and every signature. In Wisconsin, the state's Government Accountability Board (GAB) processed over 300,000 petition pages for the 2012 recall elections of the governor and four state legislators [source: GAB]. Each page was reviewed by two separate people and names were struck for illegible addresses, double entries and other problems. In the end, the GAB approved over 900,000 signatures for the recall petition against Governor Scott Walker, many more than the 540,208 required [source: The New York Times].

With the signatures approved, state officials schedule a recall election. Again, each state handles its recalls differently. Some states hold a simultaneous recall, in which voters answer two questions: 1) Do you think the official should be recalled; and 2) Who do you want to replace that official? If the majority of voters answer "yes" to the recall question, then the person who receives the most votes on the second question is the winner. In other states, the approval of the recall petition triggers a special recall election in which the recalled official runs against a single opponent. If more than one person wants to run, then a primary must be held. In four states, if a majority of voters say "yes" to a recall, then the official's post is rendered vacant or is filled by a temporary replacement until the next scheduled election [source: National Conference of State Legislators].

With the rash of recall elections recently, an important question remains: Do political recalls even work? We'll tackle that question on the next page.