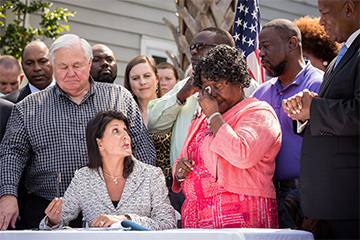 Theoretically, a body camera can tell us what really happened. Condemn or exonerate an officer based on unbiased, visual data.

But there are several glitches, the first being that officers don't necessarily turn them on. The North Tonawanda police department in New York requires that officers wear body cameras, but police union contracts require that recording with them be optional [source: Vaughters]. During a six-month body-camera trial in Denver, officers captured only 25 percent of their use-of-force interactions [source: Major].

Another problem is that video footage isn't really unbiased. A body-camera recording doesn't show the scene; it shows the officer's view of the scene. And even then it may not show everything. A collar-mounted camera doesn't follow an officer's eyes as they move. Few of the models have wide-angle lenses that match the human visual field [sources: Wolchover, NLECTC].

Finally, video evidence is ultimately open to interpretation. Studies have shown that factors like gender, cultural background and even where one focuses one's eyes can affect how someone interprets video footage [sources: Kahan, Benares, Harvard Law Review]. In 2014, members of a New York grand jury saw cell-phone footage of an officer holding an unarmed, prone man in a chokehold, the man repeatedly gasping "I can't breathe," until he died. They ultimately decided not to indict the officer for a crime. Others very clearly saw a criminal act [sources: New York Times, ABC News].

A long history of similarly disparate interpretations brings us to this: The link between video evidence and police accountability is questionable.

But maybe that's not the point. The Rialto study and a lot of anecdotal evidence suggests that when people are on camera, they behave better. And it's not just the police. When civilians realize they're being recorded, they adjust their behavior, too [sources: Wells, Weiner]. And if it's true that with body cameras running, police are less likely to use force, and civilians are less likely to find fault in police behavior, maybe the best possible outcome of surveilling all police work is not for police to be held more accountable for unjust violence but for there to be less unjust violence to account for. Which actually might be doable.

Driving in the car with my husband, talking about my latest research topic, I mentioned that some see potential nefarious uses for the footage collected by police body cameras. Maybe facial recognition software turns it into a people-tracking tool. Maybe the police themselves are sent out to spy on people. "Maybe," he says, "the police use it in training. Like reviewing footage after the game." As in, "What did this officer miss when he pulled his gun? What should he have seen that would have told him there was actually no threat?" Or, "Watch carefully. These two executed a street stop perfectly." I came across this idea not at all in my many hours of research, and while it's possible the ACLU might see this differently, I think it's a potentially brilliant use of the technology. (My husband, ladies and gentlemen.)