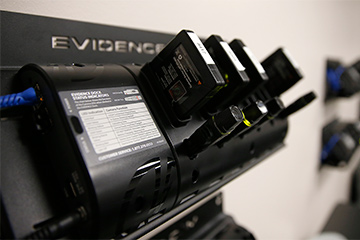 Body cameras and their batteries are docked for charging and downloading video in a patrol room.
George Frey/Getty Images

Oakland's 600 body cameras generate 7 terabytes of video footage every month [sources: Brown, Elinson and Frosch]. Storing that much sensitive data is a challenge, to put it mildly. Oakland has to keep the footage for at least two years, and any video involved in an investigation is stored for longer [source: Elinson and Frosch]. In Duluth, Minnesota, it's at least 30 days [source: Bakst and Foley]. Laurel, Maryland, has to store it for at least six months [source: Weiner].

The sheer amount of data is staggering, but data-security standards for law enforcement further complicate the situation. All footage is considered potential evidence in a criminal or disciplinary case, so the ability to view, delete or modify it in any way has to be strictly controlled, and all interactions with the video meticulously documented to maintain chain of custody [source: Ferrell].

Some departments set up their own secure server systems, which means big upfront costs in hardware and software. It also means training, transferring all footage manually and maintaining the database in-house [source: GCN].

The cloud is another option. Most commercial systems don't cut it security-wise, though, so several camera manufacturers offer cloud services that meet the specific needs of law enforcement [source: GCN]. In Taser's system, all data is encrypted and transferred wirelessly to the cloud when officers dock their cameras after their shifts [source: GCN]. The system automatically records all interactions with the data, and district attorneys can access the footage remotely. If someone who has deleting privileges initiates that process, the system automatically notifies all others with deleting privileges before discarding the data [source: Wells].

However you store and manage the footage — an estimated 1 terabyte per year per camera — it's costly [source: Emergency Management Law]. The Los Angeles Police Department expects to pay about $870,000 per year to maintain the footage from the 860 cameras it purchased in 2014 — and $7 million per year when it puts cameras on each of its 7,000 officers [sources: Police Magazine, Stoltze]. In 2014, Baltimore vetoed a body-camera program that came with projected storage costs of $2.6 million per year [source: Bakst and Foley].

Costs can potentially be offset, though, by a reduction in civilian complaints, faster investigations of complaints and, since video evidence can clearly exonerate officers of wrongdoing, reduced lawsuit payouts [source: Wells].

The U.S. government, for its part, is issuing grants to local police departments to assist with equipment and maintenance costs — tax dollars well-spent if the cameras really do increase safety, accountability and transparency in policing [source: Flores].

But to many, that outcome is uncertain. And one potential drawback of the technology has some wondering if it's worth the risk.

The stock price for Taser International more than doubled between August 2014, when Michael Brown was killed, and April 2015 [source: Meyer].