Why do people yell 'Play 'Freebird'' at concerts? 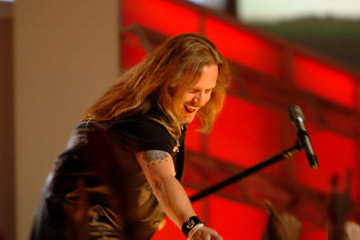 So, how have bands dealt with this strange musical phenomenon? Some have added unusual covers of the song to their repertoires, while others rant and refuse to play it.

And some respond in the way of all people of the early 21st century, with a Facebook page. Colin Meloy of the Decemberists started the page Musicians Against the Calling Out of Freebird (MACOF). On the group's page he says, "This is a serious issue facing today's culture. How can musicians around the world ever feel appreciated when people throw out a request as appalling as Freedbird [sic] at concerts?" Of course, in the best (if short) tradition of social media, a counter page, Keep Yelling Freebird, also exists [source: KYF].

Some bands rant. Modest Mouse, for example, has a famous, if not family-friendly, one. Some bands put their own spin on the tune and play it when asked. Here are examples of responses given by several bands that you might not expect to have a version of "Freebird" available on immediate notice:

But maybe that's OK. Maybe the song's lyric, "I'm as free as a bird now," explains it all. We're all free to respond to the phenomenon as we choose -- whether we find it annoying or inspiring.

Links to lots more information about Skynyrd, "Freebird" and the folks who request it in crowded concerts can be found below.