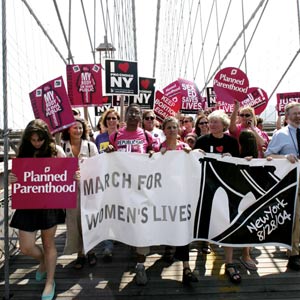 Abortion has always been a controversial issue, but at the time of Planned Parenthood's founding, there was more of a concern about birth control. At the turn of the 20th century, the country was governed by the Comstock laws, which held that it was illegal to send obscene materials through the mail. Included on the list of obscene materials was any information regarding contraceptives or preventing conception.

In the early 1900s, Margaret Sanger, who had seen her own mother give birth to 18 children, saw the misery created by unwanted pregnancies in poor families who couldn't support the children. Additionally, women were seeking back-alley abortions that often ended in serious injury or death. Thinking that wider availability of contraceptives would prevent abortions as well as these large families of unwanted children, Sanger opened the country's first birth control clinic in Brooklyn in 1916. That clinic and Sanger's American Birth Control League would eventually become Planned Parenthood.

Sanger and Planned Parenthood played major roles in defying and changing the laws so that more women had access to reproductive health care. Planned Parenthood even provided the grant that financed the testing of the birth control pill. When the FDA approved its use in 1960, Planned Parenthood campaigned for its distribution to women, regardless of their income level. At the time, Planned Parenthood had the presidential administration's support. President Lyndon Johnson identified a lack of family planning as one of the four most pressing health issues facing the country, and his successor, Richard Nixon, established Title X of the Public Health Services Act, which made contraceptives available even to those without the ability to pay. Title X was later expanded to include sex education programs for teenagers.

As more women accepted the idea that they had the right to choose when to become pregnant via the use of birth control, more people started to believe that true reproductive choice also included the ability to terminate an unwanted pregnancy. Planned Parenthood, which had always been opposed to unsafe abortions, joined the fight to legalize abortion, which was realized in the court case Roe v. Wade in 1973. Since the case's ruling, Planned Parenthood has always fought against any legal encroachment upon the rights provided by the Roe decision. However, that task became difficult three years later, when abortion and reproductive rights became a party issue. For the first time, the Republican Party and the Democratic Party established their first anti-abortion and abortion rights platforms, respectively.

­­Since that time, Planned Parenthood's work has been shaped largely by the political leanings of the president. Title X has been restricted during Republican administrations and expanded during Democratic administrations. In 1984, the Reagan administration created the global gag rule, which pulled U.S. family planning funds from any international organization that provided information on abortion to its clients, even if that information was paid for by different funds. This move in effect defunded the International Planned Parenthood Federation (in 1952, the Planned Parenthood Federation of America joined with seven other family planning organizations to create the international organization), which refused to comply with the requirements. Three years later, Reagan introduced a domestic version of the gag rule, leading a Planned Parenthood medical director to sue on the grounds that a doctor's right to free speech was violated by the policy. The Supreme Court upheld the gag rule. Since then, the global and domestic gag rules have been alternately revoked by Democratic administrations and reinstated by Republican administrations.

Regardless of leadership, however, grassroots efforts support Planned Parenthood's mission. For example, when abortion clinics endured violent picketers and when abortion providers received death threats (or in tragic cases, actual bullets), then volunteers have responded to escort patients into Planned Parenthood's clinics. When an elected official says or does something particularly offensive to those who support the right to an abortion, then Planned Parenthood is flooded with donations. It's safe to say that you will see Planned Parenthood's citizen activists on the site whenever there is a threat to the reproductive issues the organization stands for.

Critics claim that Planned Parenthood is too jumpy about some of these issues and works to block rulings that the majority of people in an area may support, such as mandatory 24-hour waiting periods before an abortion. On the next page, we'll take a look at the other criticism that has been leveled at Planned Parenthood.