Does parenting make a difference? 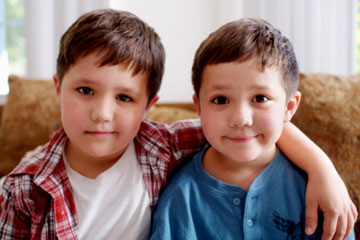 What makes us who we are? The biology of genetics or the environmental tinkering of parents? A highly controversial study carried out from the late 1960s until 1980 sought to settle that contentious score by zeroing in on a population that could yield the richest results: twins. A child psychologist and child psychiatrist teamed up with a New York adoption agency to split up a group of 13 twins and triplets and track their life courses as they grew up in vastly different households and without the knowledge of being a multiple [source: Richman]. The researchers wanted to test over the life-term whether nature or nurture would steer the pairs and trios sharing identical genetic information toward similar or disparate paths.

In 2004, a pair of twin sisters unwittingly involved in the study met up for the first time. Despite being raised in vastly different families, it turned out that Paula Bernstein and Elyse Schein both ended up serving as editors of their high school newspapers and studying film at liberal arts colleges [source: Richman]. Even down to their political affiliations, the twins were clearly cut from the same cloth [source: France].

Psychology researcher Judith Harris might point to that anecdote as evidence in favor of her nature-over-nurture hypothesis, which ignited major backlash within the psychological community in 1998. As detailed in her book "The Nurture Assumption," Harris contends that parents don't really make much difference in how their kids turn out [source: Begley]. The parents-may-wreck-all logic was instigated, Harris argues, by Freud and his fretful theory of psychosexual development, which reimagined little boys and girls as Oedipuses- and Electras-in-waiting who might develop into maladjusted adults if their parents don't pamper or potty train them properly.

Harris' thesis contends, on the contrary, that heredity and peer relations –- i.e. the extra-familial environment -- are actually pulling the puppet strings of destiny [source: Harris]. Furthermore, more recent behavioral genetics studies calculate that DNA wields up to 50 percent of the power when it comes to molding how kids conduct themselves, which can have an ocean's-worth of ripple effects down the road [source: Azar].

Behavioral psychologists couldn't disagree more. In some academic circles, the prevailing belief is that parenting during the formative years of infancy and childhood imprints patterns and behaviors so lastingly, it can be referred to as "programming" [source: Gross]. Intervention studies on parenting practices, for instance, have found that positive adjustments to how adults interact with and discipline their young kids can improve the children's social skills, academic performance and focus [source: Azar]. As go moms and dads, these mental health experts maintain, so go sons and daughters.

The intellectual boxing match between shrinks and geneticists likely won't end anytime soon, because the various and sundry ingredients of child development are -- so far, at least -- impossible to measure out precisely. Studies can draw compelling correlations between, say, how often mom or dad reads to their preschooler and the child's language arts skills, or particular gene sequences and impulse control. But researchers also have acknowledged that quantifying the long-term impacts of these kinds of factors in adulthood is beyond their grasp. 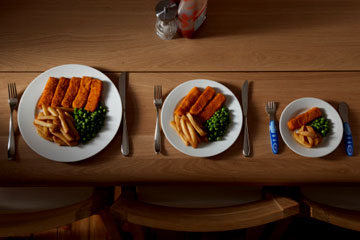 Parents pass along their dietary habits to their children.
Martin Poole/Getty Images

Babies and children acquire new skills and behaviors by imitation, which isn't always a good thing. Research has established troubling links between parents' alcoholism, drug use, and verbal or physical abuse and the same destructive behavior cropping up in their children [source: Stephens]. Same goes for cigarettes. A 2005 study out of the University of Washington's Seattle Social Development Project found that 12-year-olds are twice as likely to pick up a tobacco habit if their parents regularly light up [source: Schwartz].

With a majority of American adults overweight or obese, clinicians also have started paying closer attention to whether poor diets and lack of exercise run in the family [source: Bachman]. Spoiler alert: They do. Even if moms and dads aren't around at mealtime, young children with nutritionally lackluster diets at home will opt for junk foods, a 2008 Dartmouth University study found. The facilitators simulated a grocery store game and asked a group of 2- to 6-year-olds to pretend shop. In addition to the junk food trend, kids with smoker parents were more likely to toss a pack in their baskets, and those whose folks drank on occasion also added beer and wine to their make-believe grocery lists [source: Sutherland et al].

On a brighter note, research also has compiled interesting data on how parents can steer sons' and daughters' career paths. A 2009 study from the University of Maryland examined how fathers bestow "job specific human capital," or work skills, on their kids; out of 63,000 people, between 20 and 30 percent followed in their dads' footsteps professionally [source: Parker-Pope]. On the flip side, how well adult children fare also bears psychological repercussions for aging parents. A psychologist at the University of Wisconsin determined that kids' mental health and educational achievements in particular were closely associated with how parents judged their own personal success or failure over the long haul [source: Ryff].

In that way, while kids may adopt many behaviors and traits from their parents, maturing into iterations of their caregivers, parents similarly perceive their children as self-reflective mirrors. That's why, perhaps, quirky sons and daughters who seem to have been born with personalities and aspirations from an alien family are idiomatically labeled "black sheep" and "red-headed stepchildren." Because whether or not science fully supports the possibility that parents wield long-term power over their offsprings' outcomes, many moms and dads unwittingly expect to raise "chips off the old block" instead of kids who -- despite toddler tantrums and teenaged protestations -- will grow up into versions of themselves, only better.

As a kid, family and friends commonly commented on how much I favored my dad. We're both tall brunettes with brown eyes to boot and similar senses of humor. Reaching the teen years, I began to notice certain aspects of my personality and temperament that mirrored my father's as well. Then a couple years ago, out of nowhere it seemed, hints of my mother began to pop up in certain speech patterns and behavioral traits. While I'm no carbon copy of my folks, my adult self is clearly a product of their combined genes.

With that in mind, the research on how closely kids will turn out like their parents was especially compelling to me. For years, psychologists and scientists have argued back and forth over whether nature or nurture makes a bigger difference in child development, and not surprisingly, neither side has emerged the victor because it's a wild cocktail of both genes and parental intervention -- along with a host of other chance factors, such as geography, socioeconomics and peer groups -- that helps determine what type of adult a baby will mature into. But even with the knowledge that my brown hair and eyes are biological results of DNA, which has also contributed to my personality traits, I still prefer to link those aspects of myself back to my parents, like small mementos they passed along my way.