Browse the article Money, Drugs and Madness: The Life and Death of Pablo Escobar 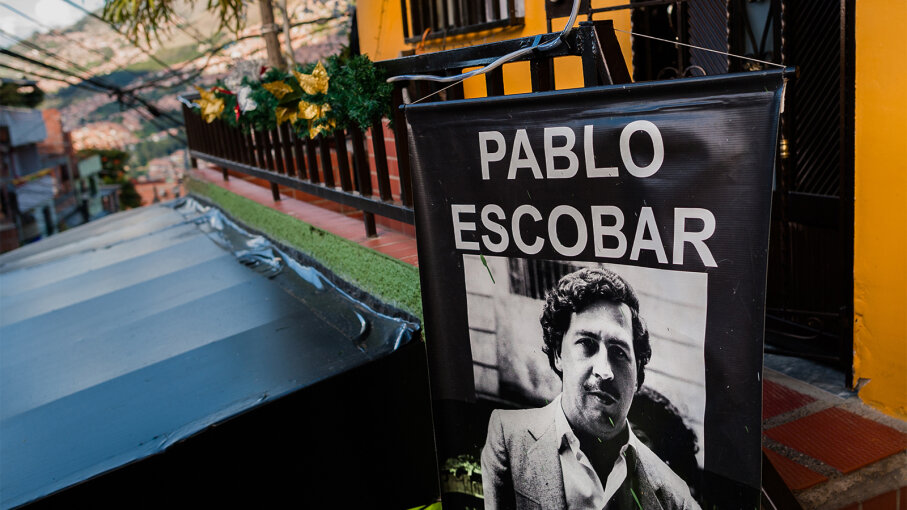 A banner depicting the drug lord Pablo Escobar is seen hung above a barber shop in the Pablo Escobar neighborhood in Medellín, Colombia in 2017. Jan Sochor/Getty Images

Pablo Escobar, the notorious Colombian druglord, once blew up a plane filled with innocent people in a desperate attempt to kill one of his countless enemies. One hundred and seven people died that morning in 1989 when a bomb was detonated on Avianca Flight 203. Three more were killed by falling pieces of the aircraft. Escobar's target wasn't even on board.

Among his multitude of crimes, Escobar ordered (and had carried out) the assassination of a Colombian presidential candidate and the country's minister of justice. He placed a bounty on policemen; hundreds were killed. As many as 50,000 people — the death toll may be lower, though most figure the total is at least in the low five figures — were murdered under the reign of "The King of Cocaine."

For all the gauzy remembrances that some lamely cling to — Escobar as the dedicated family man, the poor son of Colombia made good, a Latin American Robin Hood — the two men who finally brought Escobar to justice want you to remember: He was none of those.

"There's nothing to glamorize about this guy," says Steve Murphy, a former Drug Enforcement Agency agent whose work is dramatized in "Narcos," the Netflix series that debuted in 2015. "He's nothing more than a mass murderer. People look up to him like he's some kind of a hero. Let me tell you, if he told you to do something, and he's your idol, and you didn't do it, he'd kill you. He didn't care that you liked him. It was all about him."

Who Was Pablo Escobar?

Pablo Emilio Escobar Gaviria was born in Rionegro, Colombia, in 1949. As a youngster, he and his family moved to a suburb of Medellin, and by the time he was in his teens, he was deep into the criminal world, stealing cars and reselling gravestones he pilfered from local cemeteries.

It wasn't until Escobar hit his 20s that he was introduced to big-time crime; taking coca, grown mostly in Peru and Bolivia, synthesising it into cocaine, and shipping it to sell in the United States. By his late 20s, Escobar had founded and assumed sole control of the Medellin cartel, maybe the most successful criminal operation ever. At its height, the cartel pulled in an estimated $420 million — million — a week, 80 percent of the cocaine business worldwide.

The Medellin cartel made so much money that it literally had to stuff cash in bags — billions of U.S. dollars — and bury it. Escobar became a millionaire in his 20s. His fortune soon soared into the billions. He hit the Forbes list of richest people in the world seven years running, from 1987 (when he was estimated to be worth $3 billion) through 1993.

Escobar spent his money on a personal zoo (complete with hippos that still run wild) at a lavish estate in northwest Colombia, Hacienda Nápoles. He splurged on cars, on boats, on a fleet of airplanes, on at least one professional soccer team, and on dozens of houses throughout the country. Keenly aware of his public persona, he gave millions away, too, building housing and soccer fields in poor areas of Medellin.

But Escobar grew and maintained that wealth through the 1980s and early '90s, it should be remembered, by being a ruthless, cold-blooded killer.

Was He Really That Bad?

In silencing politicians, police, journalists and anyone who threatened his empire, Escobar turned to a virtual army of sicarios. These poor, often hand-picked Colombians — mostly teenage boys — were paid to protect Escobar and carry out his wishes. Those wishes often included killing. (A sicario is a hitman or hired assassin.)

"Pablo just manipulated those people is all he did. He gave them things, which was good, but when he needed new sicarios, he went right back in [to the poor sections of town]," Murphy says. "They were willing to die for him. Fight and die for him. We hate to give him credit for anything, but he did have somewhat of a charismatic personality."

Steve Murphy (L) and Javier Peña, the two DEA agents who were responsible for helping to bring down Escobar.
Ollie Millington/Getty Images

Murphy and his partner, Javier Peña, who also is portrayed in the Netflix series, often tangled with the people who would do Escobar's bidding.

"One of them, when I interviewed him," Peña says, "he was 15 years old, and he said, 'I love Pablo Escobar, I will die for him and I will kill for him. He gave me money, my mom now has shelter, has food, has a little house.' He said, 'I'll be dead by the time I'm 23 years old, but I will die and kill for Pablo Escobar. He has given me a life.'"

One of Escobar's main hitmen was Jhon Jairo Velásquez, known as "Popeye." He claims to have personally killed 300 people and ordered (on Escobar's behalf) the murders of 3,000 others.

"On a weekend, there'd be 400 people getting killed. It's hard to comprehend," Peña says. "You'd have two guys on a motorcycle, the guy in the back [shooting]. That was one of their favorite methods. They'd shoot you, they'd take off, in and out of traffic. The stats in Medellin were just unbelievable, the amount of people that were getting killed."

Escobar — one of the earliest of what are now known as "narcoterrorists" — would not only kill. He and his band of sicarios would torture, too.

"The guy had no remorse, had no guilt feelings about killing people, apparently had no conscience," Murphy says. "When he killed people, he didn't just kill them, he wanted to torture 'em to find out what they were saying about him. Javier's got a recording where Pablo is talking to his wife about how much he loves her and the kids, and misses them, and in the background, you can hear a guy being tortured to death."

As the Colombian government — aided by the Drug Enforcement Administration and other American agencies — began to clamp down on Escobar in the late '80s, things turned more violent. A paramilitary force of the Colombian National Police known as the Search Bloc and a vigilante group, "Los Pepes" — Perseguidos por Pablo Escobar, or People Persecuted by Pablo Escobar — finally helped bring Escobar to his inevitable fate.

How Did He Come to His End?

More than anything, Escobar feared extradition to the United States and tried to strong-arm the Colombian government into adopting a non-extradition policy. The political fighting led to outright terror and eventually to a full-fledged war between the cartel and the government. Escobar was forced to flee Hacienda Nápoles.

As the body count in Medellin and other places continued to soar and life on the run became unbearable, Escobar cut a deal. The agreement was that Escobar would turn himself in and submit to serving five years in a prison of his choosing. After he served his time, he would not be sent to the U.S. for prosecution. He could keep his money. He could say his debt was paid.

The deal was especially sweet because Escobar personally supervised the building of the "prison," known as La Catedral. It included a soccer field, a helicopter pad, a bar, a dollhouse for his kids, a Jacuzzi and a waterfall. His sicarios served as the guards. He could come and go as he pleased. The cocaine never stopped flowing. Neither did the money.

But that good life was soon to end. When two of his associates, whom he suspected were stealing from the cartel, came to La Catedral, Escobar and his men beat them to death, cut them up and threw them in a fire. That night, he held a barbecue to cover the smell of the smoldering corpses.

Once the authorities found out, they closed in on Escobar, who went on the run again.

Seventeen months after leaving La Catedral, with the National Police, the Search Bloc, Los Pepes, the Drug Enforcement Administration and a small army converging on him, Escobar was shot and killed on a rooftop in Medellin. In one well-circulated photo, Murphy crouches over Escobar's lifeless body. "I'm proud to have been part of that," he says. "I don't care what people think."

Some supporters insist that Escobar committed suicide rather than be captured and extradited to the U.S.

"Steve was there. He did not commit suicide," Peña says. "He was killed by a surgical op from the Colombian National Police. They're the ones that did it. No one else."

"Yup," Murphy says. "That's what happened. He engaged the Colombian National Police in a firefight that day and he lost. It's that simple."

Escobar's story has been told many times, notably in "Narcos," starring Chilean actor Pedro Pascal as Peña and American actor Boyd Holbrook as Murphy. After retiring from the Drug Enforcement Administration, Murphy and Peña have spent the last four years on speaking tours, hitting every continent but Africa and Antarctica, averaging about 75 appearances a year. They have a new book out, too: "Manhunters: How We Took Down Pablo Escobar."

More than 25 years have passed since Escobar died on that rooftop. The Medellin cartel is no more. The city's murder rate dropped by 80 percent the year after Escobar's death. "It was the first time that an entire international cocaine production and distribution organization was completely decimated," Murphy says. "We didn't just cut off the head of the snake. We chopped the whole snake up."

Still, even now, Escobar is celebrated as a hero to the poor. His portrait is on murals in Barrio Pablo Escobar, a regular stop for tourists in Medellin. People flock to the ruins of La Catedral and to Escobar's grave site. Escobar's brother, Roberto, an accountant for the cartel who spent 14 years in prison, hawks memorabilia with his brother's likeness and conducts a tour of one of his safehouses.

Decades after his death, the face of drug lord Pablo Escobar still haunts the streets of Medellín, Colombia, on T-shirts and merchandise.
Jan Sochor/Getty Images

"This guy should never be idolized," Peña says. "He did build housing, he did help out the Catholic Church, the sicarios — he did help them out. But he always wanted something in return.

"What we say is, Robin Hood didn't kill the next president of Colombia, didn't put a bomb on an airplane. We always talk about the terrorist side of Pablo Escobar. That was the main thing."

Now That's Interesting
Among the many land-holdings that once belonged to Escobar was a 7,336-square-foot (681-square-meter) pink mansion in Miami Beach that was used for drug drops. The mansion included two safes hidden under 4 feet (1.2 meters) of concrete beneath a set of stairs. The mansion was razed a few years ago, but the 30,000-square-foot (2,787-square-meter) lot went on sale for $15.9 million earlier this year.