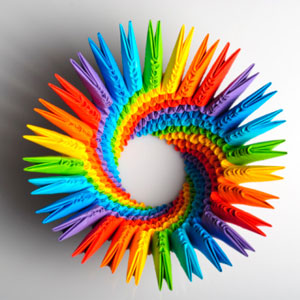 In modular origami, the artist makes many models and assembles them into a bigger piece
iStockphoto/Thinkstock

Origami has such a long history that the art form has split into many different subsets. Paperfolders might eschew one category of origami to solely embrace one genre, or they make become experts in several types of origami.

Modular origami is an offshoot of traditional origami in which the artist uses multiple sheets of paper to create many copies of the same shape. Those copies are then assembled into one larger structure. These pieces are often far more complex and much bigger thanks to the fact that the artist isn't restricted to using just one sheet of paper.

Modular origami does stick to one important rule. Artists still can't use glue, tape, or other substances to build the piece. They might, however, use a cut or certain folds in the paper to help the many discrete sheets stay in place.

Action origami is origami that can move, albeit with human assistance. For example, an origami bird might have wings that flap, or a frog might jump after you compress its papery rear legs. Bangers are also popular; when you flick or pop a banger the right way, it makes a loud noise.

Jewelry origami results in wearable art. Food origami is origami that's actually made from food, such as seaweed, fruit, or pastry. Sometimes food origami is actually folded, and other times it's just created in a manner that makes it look like traditional origami.

Some artists prefer origami tessellations. Tessellations are generally flat, and look much like a sheet of paper filled with repeating geometric patterns. Hold a tessellation up to bright light and you'll often see a kaleidoscope effect as light passes through different thicknesses in the model.

The list of origami categories goes on and on. The techniques to make the shapes of your choice, however, might be limited, especially if you adhere to one technique or style of origami.

The so-called Pureland style of origami restricts artists to making only one fold at a time. Complex folds are forbidden altogether.

Technical origami uses crease patterns in place of diagrams for very complex models. The crease pattern shows where each individual fold must be made on the sheet. Usually very mathematical in nature, technical origami is responsible for most ultra-complicated models, and some artists use computers to complete the diagrams.

Wet-folding, a technique introduced by Yoshizawa, is much more flexible, allowing for the use of dampened paper, which lets the artist make soft, rounded edges and curves instead of just sharp, jagged edges.

Regardless of the exact genre or technique, origami still depends largely on the paper quality and characteristics. On the next page you'll see just how important paper is to folding masters.