Know When to Fold 'em 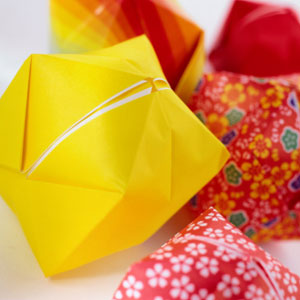 Origami can be very simple or exasperatingly difficult. By mastering basic folds, you can advance to harder models.
Ryan McVay/Stockbyte/Thinkstock

Origami isn't just about folding paper cranes and airplanes. It encompasses an entire range of paper-folding genres and categories, all with their own expert practitioners and aficionados.

There are a few basic guidelines to which serious paper folders adhere: They generally use only one solid sheet of paper, they don't cut the paper in any way, and they don't use glue, either. That means paperfolders must carefully plot out complex designs and also make the best use of each fold.

Folding is the basis of all origami. To that end, paperfolders have developed many types of folds that let them push toward evermore elaborate designs.

With these sorts of basic folds, a paperfolder makes bases, which are simple starting shapes that serve as jumping off points for a plethora of different models. There are four primary bases. From easiest to most difficult, those bases are the kite base, the fish base, the bird base, and the frog base.

Animals are a popular subject with paperfolders. However, clever artists don't settle for rough approximations of their subject creatures. Instead, they strive for meticulous recreations of specific species, right down to the shapely legs of a helmet beetle or the jagged contours of a mountain gorilla's face. Artists apply the same dedication to their representations of people, architectural structures, automobiles and even plants.

Geometrical designs are another common motif. Using precise diagrams, paperfolders bend and twist the paper into all sorts of sophisticated and tricky shapes.

Many people use a flat surface, such as a table or desk, to make folding easier. Some artists insist on folding with only their hands, without so much as the help of a table. Others employ simple tools, like paperclips, to make the process a little easier.

The word "easier" is relative, though. On the next page, you'll read more about insanely Byzantine origami handiworks.