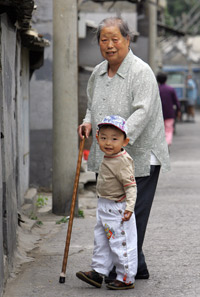 China may face problems as a smaller workforce made of singleton children is forced to support a large, aging population.
Frederick J. Brown/AFP/Getty Images

Over the decades, China has come under fire regarding its population control policies and methods of enforcement, and has been accused of human and reproductive rights issues, female infanticide and unsafe practices. It's suggested that China's family planning policies force or coerce women into having abortions and sterilizations through social, economic and psychological pressures, discriminate against women and encroach on the human right to reproduce.

Additionally, the one-child policy, along with China's traditional preference for male heirs, has contributed to the problem of gender imbalance. In 2010, for example, there were 51 million more men than women in China; that year, 120 boys were born for every 100 girls. By comparison there were just about 96 men for every 100 women in the U.S. [source: Ro, Census Bureau]. Girl infants are abandoned at a high rate. Female infanticide, the act of intentionally killing female infants and fetuses, is an acknowledged problem in China. And in rural parts of the country, infant mortality rates are as much as 27 percent higher for girls than boys, often due to neglect [source: U.S. Department of State]. And because of this bias, the proportion of young single men to single women over the next decade will get problematic -- it's estimated that 35 million men will be forced into a lifetime of bachelorhood [source: Ford].

The abortion rate hovers around 1 out of every 100, which equals more than 13 million abortions annually (a number that only includes those that are performed by licensed health care professionals, which may include abortions that were forced on the patient). In comparison, the reported abortion rate in the U.S. is 1 in 500 [source: Jiang].

Amid controversy of its strict methods and enforcement of rules, China continues to look ahead at ways to improve its population policies. The National Population and Family Planning Commission of China (NPFPC) is planning programs and advances in the quality of both social and reproductive health services. To address the social stigma of having girls and the related gender-ratio imbalance, for example, the NPFPC launched a campaign named "Girl Care" in rural areas. One publicity campaign in Hebei Province, for example, includes billboard advertisements reading, "There's no difference between having a girl or a boy -- girls can also continue the family line." China has also made it illegal to discriminate against women who give birth to baby girls, and has prohibited ultrasounds to determine gender and sex-selective abortions after an ultrasound.

China's demographic decline also has resulted in a rising ratio of elderly to wage-earning adults -- about 194 million Chinese over the age of 60 have no or few children to care for them [source: Yang]. The smaller workforce comprised of singleton children is challenged to support two sets of aging parents; China also lacks adequate pension coverage and social welfare systems, putting young workers under financial pressure as they try to pick up the burden. The new 2013 policy that allows two children to couples where either parent is an only child is expected to create a minor population boost of about 1 to 2 million additional children born per year, helping to both ease the skewed gender ratio and offset the ratio of growing elderly to declining young [source: Chang].

There was something about this assignment that made people say the oddest things when I mentioned it to them. Some wondered if I'd end up on a special list, marked by the Chinese government for writing about the one-child rule, as if this policy were a secret. I originally wrote this piece concurrently with an assignment about how thousands of children in China were being named "Olympics" in honor of the 2008 Beijing Olympic Games, and the juxtaposition of these two filled my research with the history of the Chinese family and strict population control with scenes and stories of new families celebrating their country as well as creating good luck and a sense of individuality for these infants by giving them a specialized, magical name.