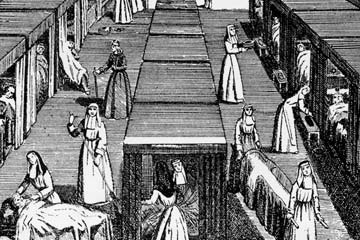 A print of sisters at work in a convent hospital, circa 1650.
Hulton Archive/Getty Images

In 1298, Pope Boniface VIII issues a papal bull decreeing that complete enclosure with cloisters was a requirement for all nuns. In his pronouncement, Boniface VIII said that nuns should never see the secular world again, so that they could live more holy lives. His text, however, also included some back-handed digs at the nuns -- he said that women were unable to resist tempting men (i.e., the priests who lived nearby) and for their own safety, and the safety of all men, they should be removed from any situation where they might get into trouble. The Vatican set very specific rules about nuns' dwellings, including dictates that windows couldn't overlook public roads. The male priests who had conducted affairs with nuns were spared any punishment.

The pope's announcement had little effect on the communities that already lived contemplatively, but the orders with active ministries were in trouble. Some orders elected to claim that they weren't religious, so that the monks and sisters could continue to work with the public. Other orders fought with the Vatican for recognition of validity; in trying to prove that nuns could performs community service while remaining devout, the sisters of such orders were often denounced or excommunicated. Mary Ward is a notable example of a woman who tried to maintain her status as a nun while ministering to the public. Born in 1585, Mary Ward traveled Europe on foot, opening Catholic schools and helping persecuted Catholics; she was deemed a heretic and imprisoned.

Ward's work was all the more difficult because it was conducted in the wake of the Protestant Reformation, a tough time for both cloistered and active nuns since they were visible symbols of the Catholic Church. Convents were denounced by Protestants as unclean and unholy places more akin to brothels. Nuns were beaten and some nuns were beheaded.

For centuries, religious women grappled with whether their community and their work was recognized by the Vatican (and it wasn't until 1900 that Pope Leo XIII acknowledged that active sisters had earned the distinction). Though the 20th century dawned with good news for all Catholic nuns and sisters, the coming decades would test them still further.