FISA, Its Court and Its Amendments 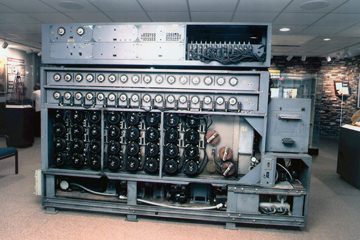 The U.S. Navy's Cryptanalytic Bombe was used to decode messages sent from Germany's Enigma cipher machine and led to Allied successes in World War II. It can be seen at the NSA’s National Cryptologic Museum in Maryland, which is open to the public.
National Security Agency

Enacted in 1978, the Foreign Intelligence Surveillance Act was largely designed to ensure that NSA and other federal intelligence agencies could not monitor American citizens' electronic communications without first obtaining a warrant based on probable cause. The act also created an independent Foreign Intelligence Surveillance Court made up of federal judges tasked with reviewing warrant applications [sources: Greenwald, Federal Judicial Center].

Until Edward Snowden's leaks, the 11-member FISA court's operations were cloaked in as much secrecy as the government spooks for which it served as gatekeeper. What we now know is that the gate is almost always open: The court denied only 11 of the nearly 34,000 warrant applications it reviewed between 1979 and 2012. That's an approval rate of about 99.97 percent [source: Barnes].

Meanwhile, lawmakers widened FISA to expand the domestic snooping the NSA and other intelligence agencies could do legally. Shortly after the Sept. 11 attacks, President George W. Bush -- with broad bipartisan support from Congress -- signed into law the USA PATRIOT Act. Among other amendments, the legislation expanded the types of "business records" feds could obtain from companies to include "any tangible thing" related to an investigation to obtain foreign intelligence or protect against terrorism. In a 2002 executive order, Bush also specifically authorized the NSA for the first time to monitor international e-mails and phone calls from people inside the U.S. When news of the program leaked three years later, administration officials said that they still required the NSA to obtain warrants for entirely domestic communications [sources: Bazon, Risen].

The 2008 FISA Amendments Act largely legitimized the NSA wireless monitoring program. The amended law, extended by President Barack Obama and Congress for another five years in December 2012, allows the feds to monitor U.S. citizens' communications with foreign nationals who are the target of an investigation without first obtaining a warrant. Intelligence gatherers need only obtain a warrant under the law where a person in the U.S. is the target of the investigation or the communication is entirely domestic [sources: Granick, Greenwald].