What the NSA Does 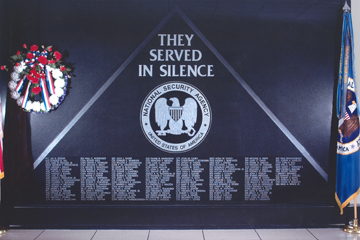 A memorial to the more than 170 NSA cryptologists who have died while serving their country. It is housed at NSA headquarters.
National Security Agency

Working alongside the Central Security Service, a companion group comprising active military members, the NSA is tasked with a wide range of code-making and code-breaking activities. In other words, the agency encrypts secretive government communications, data and other information to protect it from hackers while actively seeking to uncover and decode the same types of materials from other countries and persons of interest [sources: NSA, NSA].

The director of both organizations is appointed by the Secretary of Defense and approved by the president before taking the reins. The director must be a commissioned military officer with at least a three-star rank. This person also heads U.S. Cyber Command, a "network warfare" unit created in 2005 to protect against terrorist data and network threats [source: NSA].

The NSA and CSS have two official missions: signals intelligence -- commonly known as "SIGINT" -- and information assurance. The agencies collect SIGINT from various sources, including foreign communications, radar and other electronic systems. The work isn't exactly easy. Information is often coded, not to mention shared in foreign languages and sometimes obscure dialects. Meanwhile, information assurance programs are aimed at preventing others from hacking, stealing or otherwise tampering with national security systems and sensitive information. NSA is officially responsible for maintaining the security of the information systems used by the Defense Department and several other government organizations [sources: NSA, NSA].

A shifting focus toward cyber warfare has meant an influx of tech-savvy workers joining the NSA's ranks. The agency hired 3,500 new employees in 2011 and 2012 combined. Many were in fields such as computer science, engineering and intelligence analysis [source: NSA]. But technical majors are not always required. For instance, the NSA says it has hired people for cryptanalysis (analyzing information systems to detect hidden aspects) who majored in music and history as well as mathematics. In general, professionals who are hired for the various NSA positions are placed in development programs where they attend classes, get technical training and rotate through departments. The NSA also offers several paid internships to expose college students to its career opportunities. For more information and to see available jobs, visit the NSA's careers page.