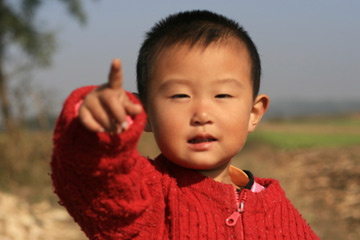 Let's say that you're traveling to a country where you don't speak the language. You didn't have time to pick up a dictionary or a book of common phrases, so you'll have to get around using only hand gestures. At a restaurant, you try to indicate which dishes you'd like by nodding or giving the server a thumbs-up, but all you get is the opposite of what you wanted and an offended look. No one will look you in the eye, and one person seemed downright affronted by your attempts to point out on a map where you'd like to go. What gives?

We may think that nonverbal communication is universal, but it's not. Every culture interprets body language, gestures, posture and carriage, vocal noises (like shrieks and grunts), and degree of eye contact differently. In the example above, the poor traveler might have expected that nodding his or her head up and down would indicate yes, but in some countries, it means just the opposite. In the Middle East, nodding the head down indicates agreement, while nodding it up is a sign of disagreement; in Japan, a up-and-down nod might just be a signal that someone is listening [source: Wang, Li]. The thumbs-up signal is vulgar in Iran. The "OK" signal made by forming a circle with the thumb and forefinger refers to money in some countries, while in others it's an extremely offensive reference to a private body part. Point with the wrong finger, or with anything less than your entire hand, and you risk offending somebody, and while some cultures value eye contact as a sign of respect, averting your eyes may be the sign of respect in others.

The list goes on and on: Some countries consider a handshake rude, and it's always rude to hand an object to another person with your left hand in the Middle East -- after all, that hand is reserved for matters of personal hygiene. While burping after a meal is considered the height of uncouthness here in the U.S., a hearty belch is a sign of appreciation for the cook in India. In some places, people value a certain degree of personal space in conversation, while those from the Middle East might get right up in your face when they want to converse. In Latin America, it's expected that you'll get very touchy-feely with both strangers and friends -- perhaps exchanging a hearty embrace -- whereas in the U.S., such contact might be considered sexual. And restrain the desire to pat a child on the head in Asia; there's a belief that such a touch would damage the child's soul.

Facial expressions might be the only form of nonverbal communication that could be considered universal. It was Charles Darwin who first proposed that all cultures express emotions the same way with their faces, a hypothesis that was supported by laboratory studies in the 1960s. Researchers determined that there are six universal facial expressions: anger, disgust, fear, happiness, sadness and surprise [source: Matsumoto]. In more recent years, other researchers have argued that looks of contempt and embarrassment may also constitute universal expressions. No matter where you are, it seems, you must remember that your body is always saying something, even when you're not speaking.