How do new states become part of the U.S.?

Browse the article How do new states become part of the U.S.? 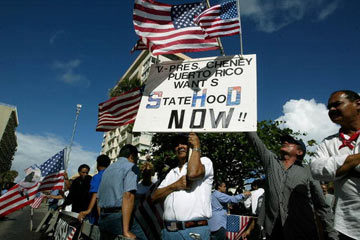 Demonstrators demand statehood outside a San Juan hotel where then-VP Dick Cheney was speaking in 2004. In 2012, a referendum on the island showed statehood received the most votes for the first time ever. See more protesting pictures.
Getty Images

On Nov. 6, 2012, Puerto Rico held elections, but not for president of the United States. Puerto Rico is a self-governing commonwealth that is "associated" with the U.S. Thanks to a 1917 law, Puerto Ricans are U.S. citizens, but since Puerto Rico isn't a state, the island's inhabitants cannot vote in presidential elections. In an odd twist, they can vote in presidential primaries, because primaries are organized by the Democratic and Republican national committees, not the federal government [source: Helgesen].

The 2012 Puerto Rican election was for governor, the highest-ranking official on the island, but it was a ballot referendum that grabbed the headlines. For the first time since Puerto Rico became a commonwealth in 1952, a majority of Puerto Ricans voted against the current relationship with the U.S. When asked what political status they preferred, "statehood" received the most votes [source: Fabian]. The popular vote for statehood represents a significant shift in Puerto Rico's political winds, but it's not enough to make the commonwealth a state.

According to Article IV, Section 3 of the U.S. Constitution, only Congress has the ability to authorize the creation of a new state. Specifically, Section 3 prohibits the creation of new states from the territory of others without their consent, or the combining of two or more states without Congressional approval [source: Monk].

In practice, a majority of the 50 states began as U.S. territories. Either the territories petitioned Congress for permission to draft a state constitution and elect representatives, or they followed the more aggressive "Tennessee Plan." Tennessee, the very first U.S. territory, was rejected in its first bid for statehood, but decided to draft a state constitution anyway, and send two senators and a representative to Congress [source: Lehleitner]. Although Congress refused to seat the men, they successfully lobbied for statehood. Several other states followed the Tennessee model, including Alaska.

Official admission to the Union requires Congress to draft -- and the president to sign -- a bill called an "enabling act." For Puerto Rico to become a state, it would need to convince Congress and the president that statehood is not only in the best interest of the Puerto Rican people, but in the best interest of the United States as a whole. The U.S. Senate and the House of Representatives would need to approve the statehood admission by a two-thirds majority vote [source: The Week].

For some perspective, let's look at where the other 50 states came from, and how the United States grew from 13 coastal colonies to the world's third-largest country.

Where the 50 States Came From

As part of the Treaty of Paris, England handed over the area that is now the eastern United States, from the Atlantic Ocean all the way to the Mississippi River, bound by Canada to the north and the Spanish colonies of East and West Florida to the south [source: National Atlas]. This territory far exceeded the original boundaries of the 13 colonies. In an effort to avoid territorial disputes among the new states, Congress convinced the states to relinquish control of uninhabited lands to the Federal government.

Other states were carved out of existing states: Vermont was sliced from New York (1791); Kentucky was born from Virginia (1792); Tennessee began as the western extension of North Carolina (1796); Maine was originally part of Massachusetts (1820); and West Virginia split from Virginia in 1863 to join the Union in the Civil War [sources: National Atlas and West Virginia Archives and History].

The rest of the U.S. began as land purchased from other countries or as the spoils of war. The Louisiana Purchase (1803) is the largest and most famous, doubling the size of the nation for a price tag of $15 million [source: Library of Congress]. The U.S. also bought Florida from Spain and Alaska from Russia.

Large portions of the American West were once Mexican territories. Texas won independence from Mexico in 1836 and was annexed by the U.S. as a state in 1845. After losing the Mexican-American War, Mexico ceded the land that would become California, Nevada, Utah, Arizona and parts of Colorado and New Mexico for $15 million [source: National Atlas].

Hawaii, the most geographically isolated state, first became a U.S. territory in 1898, after American colonists overthrew the Hawaiian kingdom in a peaceful coup [source: Hawaii Tourism Authority]. Hawaii didn't become a state until 1959, well after its critical role in triggering America's involvement in World War II.

Puerto Rico isn't the only contender for the 51st state. On the next page, we'll discuss Puerto Rico's chances and look at some of the statehood failures that came before it.

Puerto Rico is only the latest in a long line of would-be 51st states. Over the past 200 years, there have been several attempts to carve out new states from existing ones, mostly triggered by tax and budget feuds. "South California" tried to split from the more industrialized north in 1859, but Congress said no. In 1861, parts of Tennessee, Georgia, and Alabama attempted to form a neutral state called Nickjack that wouldn't secede from the Union. More recently, rural "South Jersey" tried several times to split from its crowded urban north in the 1970s and 80s [source: Trinklein].

As a commonwealth, Puerto Rico is as close as you can get to being a state without getting a star on the flag. Puerto Ricans are U.S. citizens who pay and receive Social Security benefits. They cannot vote in federal elections and they don't pay federal income taxes. Puerto Rico is in charge of its own internal affairs, but the U.S. controls interstate trade, foreign relations, customs, military service, immigration, agriculture, radio and TV and the postal service.

Now that Puerto Rican citizens passed the referendum on statehood, what are the odds that Congress will take up their cause? Not very good. Although President Obama pledged to take action if Puerto Rican citizens made their preference clear, the political timing is not in Puerto Rico's favor. Puerto Rico suffers from a staggering 45 percent poverty rate -- more than double Mississippi, the current most impoverished state -- and would be entitled to $7.7 billion in federal spending on social programs, Medicaid and more. Since spending cuts are a top congressional priority, this is strike against Puerto Rican statehood [source: Fabian].

Today, both Guam and the U.S. Virgin Islands share Puerto Rico's odd political status; their residents are U.S. citizens who cannot vote in federal elections. Guam is hoping to hold its own referendum on statehood in 2014, but the U.S. Virgin Islands have no plans for such a vote, known as a plebiscite [source: Sablan]. Puerto Rico has shown the most political interest in statehood, holding four such plebiscites since 1967. In all previous votes, Puerto Ricans opted to remain a U.S. territory [source: Reuters].

For lots more information on U.S. history, the Constitution and the federal government, check out the links on the next page.

Washington D.C. residents pay federal taxes but have no congressional representation. While many residents support becoming a separate state, the more immediate drive is for full congressional representation. But it remains mired in partisan politics (residents overwhelmingly vote Democrat). As recently as 2009, the D.C. Voting Rights Act, which would have given D.C. citizens a vote in the U.S. House of Representatives, was passed by both houses but the Senate attached an amendment that would have ended the region's tough gun control laws, effectively killing the measure [sources: Abrams, Howell] .

Author's Note: How do new states become part of the U.S.?

The Puerto Rican vote for statehood grabbed headlines, but the results of the ballot measure were far from clear. The referendum asked two separate questions: "Are you satisfied with the current territorial status?" to which 54 percent voted no. The second question asked, "Which status do you prefer?" When the votes were tallied, 61.5 percent chose statehood, while 33 percent chose "sovereign free associated state," which is the same as the current commonwealth status. But a full 466,337 people purposely left the second question blank in protest to the odd two-part construction of the referendum, which many considered rigged for statehood supporters. If those blank votes are counted, then statehood loses. The Obama administration had promised to act on a clear mandate from the Puerto Rican people, but this referendum is anything but.