Fatalism and the Appeal of Murphy's Law 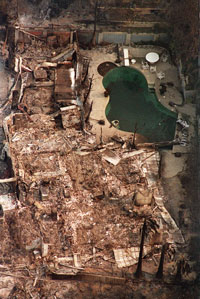 Fatalism? An untouched swimming pool is all that remains after a house was destroyed by a tornado in Laguna Beach, Ca.
Vince Bucci/AFP/Getty Images

Fatalism is the idea that we're all powerless to the whims of fate. This notion says that the things that happen to us are unavoidable, for example, that skinned knee. It's the idea that there's some kind of universal law at work that takes a certain glee at toying with us.

Fatalism contradicts another concept -- free will. This is the idea that humans possess free will and that all of our choices, along with the consequences that come with those choices, are our own.

Murphy's Law doesn't prove anything. It doesn't even explain anything. It simply states a maxim: that things will go wrong. But we forget that there are other forces at work when we consider Murphy's Law. Allegedly, It was the author Rudyard Kipling who said that no matter how many times you drop a slice of bread, it always seems to land on the floor butter-side down. Kipling, the author of "The Jungle Book," among others, was making an observation that most of us can relate to: Life is hard, almost to a laughable degree.

But with a buttered slice of bread, you must take into account the fact that one side is heavier than another. This means that on the way to the ground, the heavy side will flip toward the ground thanks to gravity, but it will not flip all the way around back to the top for the same reason. It is, after all, heavier than the side without the butter. So Kipling was right -- a piece of buttered bread will always land butter-side down.

In the next section, we'll look at Murphy's Law in math and science, and how the law can make the things we create safer and more reliable. ­

Murphy's Law and the Law of Entropy

Murphy's Law is actually supported by an accepted natural law: entropy. This law is used most often in the study of thermodynamics -- how energy changes from one form to another -- and says that, in our universe, systems tend to end up in disorder and disarray. Entropy, also called the second law of thermodynamics, supports Murphy's Law's claim that whatever can go wrong, will.