Work vs. Kids: The Mommy Track 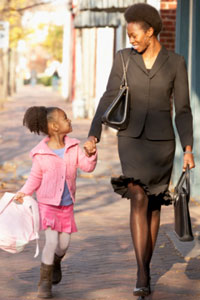 Working motherhood has its costs -- and its rewards.
Ariel Skelley/Getty Images

In early 2012, Wendy M. Williams, director of the Cornell Institute for Women in Science, and her academic colleague Stephen J. Ceci put their heads together to solve a puzzle that had long plagued the STEM -- science, technology, engineering and math -- fields. With record numbers of female students pursuing STEM careers, Williams and Ceci wanted to find out why so few end up achieving full professorships and tenure at colleges and universities. After crunching the numbers, a succinct explanation for the STEM women drop-off emerged: motherhood [source: Williams and Ceci]. Rather than put in extensive hours in pursuit of academic tenure as their biological clocks tick away, many female STEM students tend to take the off-ramp to raising a family.

Indeed, becoming a mother encompasses more than decisions about bassinets and breastfeeding. For most modern women, it involves a career choice and a determination of how much maternity leave will cost them in the end. Analysis from the U.S. Census Bureau published in 2011, for instance, found that 50 percent of first-time moms without a college degree and 13 percent with a secondary degree quit their jobs for pregnancy-related reasons [source: Bass].

Even when new moms hold on to their jobs, childbirth likely leads to a pay cut over the long term. According to the National Bureau for Economic Research, highly skilled women sacrifice 21 to 33 percent of their potential lifetime incomes after they become mothers, while dads in the office can expect to give up barely one-tenth of that [source: Leonhardt]. The business world is especially stingy toward working mothers; a Harvard study published in 2010 reported that M.B.A.-holding moms who took 18-month maternity leaves experienced, on average, a 41 percent income disparity compared to M.B.A.-toting men [source: Greenhouse].

But what about the kids? Isn't a discounted income a meager price to pay for raising healthy, adjusted kids? Conceptually, yes. Yet research on maternal employment and child development has found that working mothers don't adversely affect their children's lives. A meta analysis out of the University of California, Irvine, concluded that on the whole, children grow up into stable, successful adults whether their moms devote their time to domestic duties or office work [source: Ulene]. Moreover, a little bit of work may be good for mamas. A comparison of full-time, part-time and unemployed mothers found that part-time jobs correlated to better health, lower stress and greater sensitivity to their children's needs, compared to the women on either end of the employment spectrum [source: Rochman].

But of course, all work and no play make mothers dull -- and not to mention exhausted -- women. So to circle back to where the issue of motherhood typically begins, it's time to find out how becoming a mom affects women's love lives and long-term romantic relationships.

Hard data on the number of U.S. female prisoners who become incarcerated while pregnant are difficult to pin down since not all states track it. However, prison systems in a number of states, including California, South Dakota, Nebraska and New York have established nursery programs that allow female inmates to live with their newborns during their sentence [source: Stern]. Some criminal justice researchers think these programs can help curb the new mothers' chances of ending up back behind bars by bonding them with their babies, thereby fostering a maternal incentive to mind the law [source: Smalley].