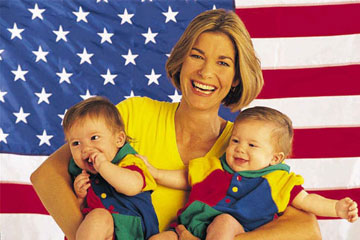 The 18th-century home functioned as much as a place of shelter and communion for families as it did as a discrete center of production. Agrarian society and artisanal trades were centered around the homestead, and mothers were central to that domestic output, responsible for tasks such as washing, cleaning, candle-making, butter-churning and weaving. Meanwhile, women enjoyed few -- if any -- legal provisions, their earnings and inheritances under the control of their husbands. In the 1750s, however, Enlightenment era thinking began to call for greater gender equality, and in the American Colonies, where anti-England sentiment was brewing, motherhood became endowed with a sense of civic duty and liberation.

Although it would be 1920 before women earned the right to vote under the 19th Amendment, mothers were immediately tapped as the source of all-important virtue in the newly established nation. Republican motherhood idealized the female task of rearing the young citizens of the infant country, conflating the influence of a mother on her children with the portent of how they would grow up and contribute to America's success [source: Rendall]. And as the country's economy shifted from domestic production to capitalism, driving fathers out of the home and into factories and urban centers during the 19th century, motherhood was further characterized as the noble bedrock of adolescent upbringing and morality. Likewise, the Victorian household was distinctly divided between the male duties of providing income and physical protection and the women's realm of nurturing and spiritual protection [source: Plant].

After World War I, however, American maternal culture dramatically turned away from soul-soothing and spiritual guidance to science. For example, the 1847 formation of the American Medical Association and its legions of male doctors lobbied to outlaw midwifery in many places in the early 1900s, effectively repositioning childbirth from a womanly affair in the home to a sterilized, male-directed procedure in a hospital [source: Leggitt]. Meanwhile, Progressive-Era child and parenting experts supported by the U.S. Children's Bureau encouraged mothers to approach child rearing as a vocation, scheduling feedings and naps and paying careful attention to the quality and amount of playtime [source: Hulbert].

In that way, the glow of full-time, at-home motherhood began to dull long before Betty Friedan's 1963 "The Feminine Mystique" appeared and second-wave feminists began burning their aprons (rather than brassieres). Anti-maternal sentiment circulated in the United States during and after World Word II, most notably with Philip Wylie's 1942 coining of "momism," referring to a supposed debilitating effect of too much maternal coddling [source: Coontz]. And yet, even in the following decades, as American motherhood has metamorphosed from an inevitable identity to an optional occupation -- with the U.S. Food and Drug Administration's 1960 approval of oral contraceptives and the 1964 Civil Rights Acts barring sex discrimination in the workplace -- the role remains controversial and contested.

Centuries-old debates about how best to be a mother won't be settled anytime soon, but whereas parties may disagree on motherhood conceptually, the biological facts of how having a baby changes the female body are indisputable, if not incredible.

U.S. Moms by the Numbers