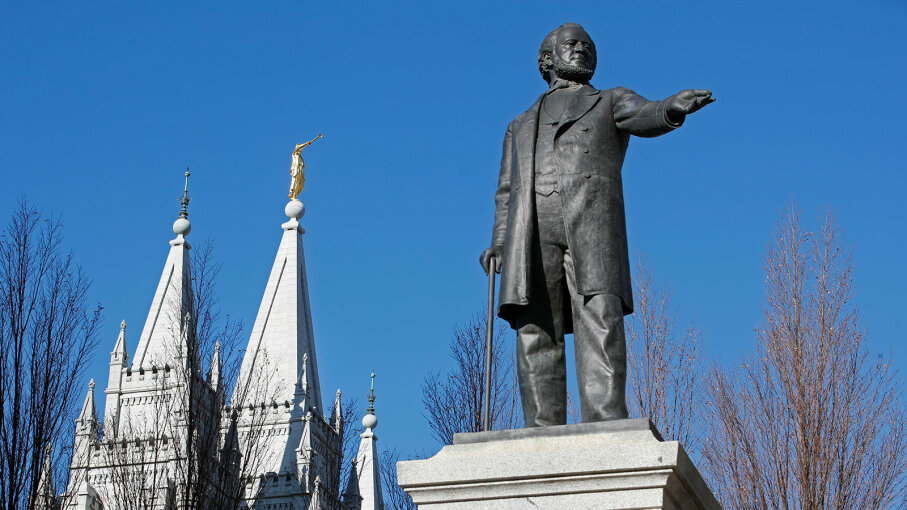 A statue of Brigham Young, the second president of the Church of Jesus Christ of Latter-Day Saints, stands outside the historic Mormon Salt Lake Temple in Salt Lake City, Utah. George Frey/Getty Images

The fast-growing The Church of Jesus Christ of Latter-day Saints claims more than 16 million members worldwide, yet remains one of the least-understood religions on the planet. Even though the Church outlawed polygamy more than a century ago, many people still think Mormons can have more than one wife. And a lot of folks still confuse Mormons with Jehovah's Witnesses and the Amish. (Which are the ones who don't dance again?)

To help set the record straight about Mormon beliefs and practice, we spoke with Matthew Bowman, the chair of Mormon Studies at Claremont Graduate University and the author of "The Mormon People: The Making of an American Faith."

Myth 1: It's Called the 'Mormon Church'

Since the church was founded by Joseph Smith in 1830, the official name has always been The Church of Jesus Christ of Latter-day Saints. But Bowman says that from the start, detractors and critics began calling the controversial new sect "Mormons" or "Mormonites," an insult directed at the "Book of Mormon," an ancient book of scripture translated and published by Smith.

But what started as a derogatory slur was soon embraced by church leaders like Brigham Young, who said that church members should be proud to be called Mormons.

"There's a long history of Christian denominations being tagged with a name by outsiders and then eventually adopting it," says Bowman, including Methodists who were criticized as "overly Methodical" in their piety and Baptists who were ridiculed for their belief in full immersion.

In recent decades, though, The Church of Jesus Christ of Latter-day Saints has distanced itself from terms like "Mormon," "Mormon Church," "LDS Church" and other nicknames, because it says they detract from Jesus Christ as the true center of Mormon belief.

Without Joseph Smith, there would be no The Church of Jesus Christ of Latter-day Saints, and for faithful Mormons, Smith was a prophet on par with Moses. But that doesn't mean that Mormons "worship" him, Bowman says.

The history of the Mormon church begins this way: In 1820, when Smith was a 14-year-old farm boy in upstate New York, he retreated to a forest grove to ask God a pressing question: Which was the right church for him to join? To Smith's shock and amazement, his prayer was answered by two angelic figures, who identified themselves as God the Father and Jesus Christ.

During this miraculous visitation, known as the First Vision, Smith was told not to join any existing church, but that the true Church of Jesus Christ would be restored through him. After receiving and translating the Book of Mormon, which describes Jesus Christ's ministry to the ancient people of the Americas, Smith was conferred with important priesthood authority that had been lost after the death of the apostles.

Smith was the first prophet of what Mormons believe is Jesus Christ's true restored church, which is organized like the ancient church with prophets and apostles. Brigham Young was the second prophet of the restored church and the line of prophets has remained unbroken through today. The current prophet is Russell M. Nelson.

Smith was fiercely persecuted for his claims and teachings, and was eventually killed along with his brother by a violent mob when he was only 38 years old. Smith's martyrdom, like those of early Christian apostles and saints, made him an even more beloved and revered figure to the Mormon faithful.

"Joseph Smith is important," says Bowman. "He's a prophetic figure who has brought the mechanism of salvation back to humanity through the priesthood and ordinances like baptism, but that's not the same as worshipping him."

It took 117 years for the church to grow from 6 members to 1 million (in 1947). But it reached the 2-million member mark just 16 years later and has been growing ever since. Today, you'll find some 16 million Mormons all over the world, not just in the U.S.

Bowman says that at the heart of this misunderstanding is a legitimate question: What does it mean to be a Christian?

"The broadest and most inclusive definition of a Christian is someone who believes in Jesus Christ," says Bowman, and by that definition Mormons are clearly Christians.

The earthly ministry and eternal role of Jesus Christ as the savior of mankind are the focus of Mormon doctrine and worship, and faithful members strive to cultivate a personal relationship with Christ through scripture study and prayer.

The Mormon Tabernacle Choir and church leaders gather in the Conference Center and at the start of the 186th annual general conference of the Church of Jesus Christ of Latter-Day Saints on April 2, 2016 in Salt Lake City, Utah.
George Frey/Getty Images

But there are also narrower definitions of Christianity where Mormon beliefs can be problematic. In Catholicism and mainline Protestantism, for example, there's the belief of the Trinity as a single Godhead manifested as three persons: God the Father, Jesus the Son and the Holy Spirit.

In Mormon teachings, based on the Book of Mormon and other revelations and visions received by Joseph Smith, the Godhead is not a Trinity, but rather three separate and distinct beings acting with one will and purpose.

Bowman says that some evangelicals also take issue with The Church of Jesus Christ of Latter-day Saints because of its teaching that certain sacraments and ordinances are necessary for salvation.

"For evangelicals, salvation is less about professing belief or performing ordinances than it is about having a spiritual conversion experience, what's known as being 'born again,'" says Bowman.

Another problem some other Christians have with the Mormon church is the fact that it holds the Book of Mormon to be sacred scripture alongside the Bible. The Latter-day Saints response to that is that the Bible itself doesn't say that "all revelations from God would be gathered into a single volume to be forever closed and that no further scriptural revelation could be received."

Polygamy, also known as plural marriage, was a central practice for Mormons in the 19th century, but the church outlawed it in 1904 and anyone suspected of practicing polygamy today is excommunicated.

In 1840, Joseph Smith received a revelation directing church members to reinstate the ancient practice of plural marriage (the biblical King Solomon had 700 wives and 300 concubines) as a way of quickly growing the faith's numbers. Since plural marriage was illegal in the United States, Mormons became an outlaw people and the subject of bitter persecution, driven from place to place until they finally found sanctuary in the wilds of Utah, which wasn't yet a state.

In 1890, as Mormons were lobbying Congress to admit Utah as a state, the then-prophet of the church Wilford Woodruff promised to end the practice of plural marriage in the faith. And in 1904, polygamy officially became punishable by excommunication from the church.

The ongoing confusion about Mormons and polygamy is that there are splinter sects living in Northern Mexico and rural parts of Arizona and Utah who continue to practice polygamy and call themselves the Fundamentalist Church of Jesus Christ of Latter-Day Saints. These groups, which often dress in 19th-century garb and live in isolated compounds, are separate and distinct from mainstream Mormons.

Faithful Mormons do their best to live by a set of health and lifestyle rules known as the Word of Wisdom. The original Word of Wisdom was a revelation given to Joseph Smith in 1833 after he prayed about the use of tobacco among church members. The answer Smith received was that men and women should not only avoid tobacco, but also alcohol and "hot drinks," which were interpreted as coffee and tea. Meat was also to be eaten "sparingly," only in times of winter and famine, and then always with thanksgiving.

In the original revelation, the Word of Wisdom was less a rule than a "principle with promise" — the promise being physical health, wisdom and knowledge to those who follow its guidelines.

"For much of the first decades of the church, the Word of Wisdom was considered good advice, something that good saints might do who wanted the promises in the revelation," says Bowman. "But there are instances of members not following it, in part because it wasn't seen as a formal commandment or injunction. The first wagon train that left for Salt Lake City carried coffee with it."

In the early 20th century, as polygamy ended, Bowman says that the Word of Wisdom took on a new significance as a way of maintaining social boundaries between the Latter-day Saints and outsiders. Eventually, adherence to the Word of Wisdom's injunctions against alcohol, tobacco, coffee and tea (but not meat) became a prerequisite for full activity in the Church.

Over time, both Mormons and non-Mormons alike wondered why coffee and tea had made the no-no list, and the consensus was that it must be the caffeine, which can be an addictive substance. So, it became a cultural norm, at least in Utah, for Mormons to avoid caffeinated soda as well as "hot drinks."

While Church leaders haven't exactly given their "blessing" to Coke and Pepsi, they have reiterated that coffee and tea are the only drinks explicitly prohibited by the Word of Wisdom. Even Brigham Young University, the church-owned college, now sells caffeinated sodas in its student dining halls.

This one is only half mythical. Mormons who have gone to an LDS temple do wear special undergarments, but they aren't magical.

Large and ornate LDS Temples are different from the smaller, plainer chapels where Mormons hold their Sunday services. At 168 Temples around the world, worthy church members over 18 years old can receive essential ordinances for salvation. When someone goes to the temple for the first time, they receive the temple "garment," which is a pair of special underwear — top and bottom — with religious significance.

For Mormons, the garment is supposed to act as a daily reminder of important covenants made in the temple. It's not supposed to have any magic powers, even though Bowman says Mormon folklore is full of such stories. The hotel magnate Bill Marriott, a member of the church, once told "60 Minutes"that his sacred undergarments had saved his life in a freak boating accident.

Bowman gets why non-Mormons think it's weird to wear special underwear, but in the context of world religions, Mormons aren't odd at all.

"Most religious traditions require some sort of special clothing," says Bowman. "Yarmulkes in Judaism, headscarves in Islam, some Hindus have a spot on their forehead, Turbans for Sikhs. Mormons are more typical than not."

Now That's Interesting
For many people, their first encounter with Mormons might be seeing two guys dressed in white shirts and ties riding bikes around town. The dress code is required by the church for full-time missionary work. But the bikes are just an easy way to get around town. In some places, public transportation or a car may be used instead.