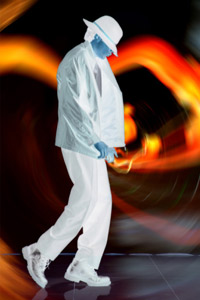 The moonwalk looks effortless when done properly, but it's actually quite tricky to perform well.
Hemera/Thinkstock

The moonwalk is considered an intermediate to difficult dance move; if you don't have dance experience already (and even if you do), it may take you awhile to master this step. However, once you get it, you'll forever be able to impress people with your skills. You need to practice the moonwalk on a smooth floor, wearing socks or very smooth-soled shoes and comfortable clothing.

Sounds simple enough, right? Like most things that look effortless, the moonwalk is tough to master. Keeping your leg straight and your foot flat while dragging it requires a lot of balance and precision. If you bend the dragging leg, lift the heel of that foot off the floor or take the toes of either foot off the floor at any point, you'll spoil the effect. The timing of lowering one heel while dragging the opposite foot must also be exact. The moonwalk should look like you're floating; it should not be jerky or appear as if you're pulling your body backward. With practice, you will build up to doing the movements to speed and without thinking about them.

Michael's version of the moonwalk had more arm motion; when performing it, he usually swung his arms back and forth as the opposite leg slid backward. He also often popped his head back and forth and hunched up his shoulders as he moonwalked. Both additions make the illusion of walking more convincing.

There are other floats or slide dance steps that are related to the backslide, including the side slide, the circle slide and the forward slide. Once you master the backslide, you can start working on expanding your slide steps. The next time you see someone moonwalk -- or do it yourself -- you'll know that it's not just Michael Jackson's move, but also the product of more than 70 years of dancing evolution. That's almost as amazing as the moonwalk itself.