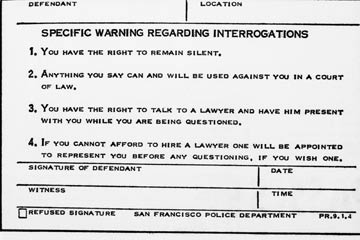 A copy of the Miranda warning from 1966. Some jurisdictions require the arrestee to sign the document showing he was apprised of his rights. See more police pictures.
© Bettmann/CORBIS

"You have the right to remain silent."

So begins one of the most iconic recitations in U.S. culture, and TV crime show fans around the world know what comes next: "Anything you do say can be used against you in a court of law. You have the right to an attorney. If can't afford an attorney, one will be appointed for you. If you waive these rights, you may invoke them at a later time."

The so-called Miranda rights are a cornerstone of the U.S. justice system. They're said so often in TV and movies they've nearly lost all meaning, at least to those outside the criminal, legal and law-enforcement communities. But in April 2013, followers of the Boston Marathon bombings case were reminded that they do, in fact, mean a lot.

After an epic manhunt put much of Boston on lockdown, the sole surviving suspect in the bombings was captured. Dzhokhar Tsarnaev was "in custody," and he'd confessed. The city breathed a sigh of relief. Within hours, though, the headlines announced what appeared to be a hitch: Tsarnaev, it seemed, hadn't been "read his rights" [source: Johnson].

And then confusion: Was it a hitch? What about the confession? Did that mean he would be released? Did the Miranda rights even apply in this case?

The intention behind the Miranda law is straightforward, but its implementation is sometimes not. It goes back to a 1966 U.S. Supreme Court decision in the case Miranda v. Arizona, an appeal of the 1963 rape and murder convictions of Ernesto Miranda. Miranda, like Tsarnaev, had confessed to the crimes in question. Also like Tsarnaev, Miranda hadn't been read his rights before he confessed.

Though technically, there was no such thing as being "read his rights" until Miranda's appeal reached the Supreme Court.

The Fifth Amendment to the U.S. Constitution includes this statement: "[no one] shall be compelled in any criminal case to be a witness against himself." This is the right against self-incrimination, a cornerstone of the U.S. justice system. Basically, it means anything a suspect says to police must be voluntary in order to be used against him in court.

Before 1966, "voluntary" was a relatively subjective standard.

In 1963, Phoenix police picked up Ernesto Miranda for questioning in the kidnapping and rape of a young woman. In the course of a two-hour interrogation, Miranda confessed to the crimes. He had not been warned of his right against self-incrimination. His confession was admitted as evidence at trial, and Miranda was convicted and sentenced to 20 to 30 years in prison [source: U.S. Courts].

Miranda v. Arizona was appealed all the way to the Supreme Court, where the central question before the Justices was this: Did the police's failure to warn Miranda of his right to remain silent violate his Fifth Amendment right against self-incrimination, making his confession involuntary and therefore inadmissible at trial?

In a 5-4 decision, the court found that Miranda had in fact been denied his constitutional right, stating, in part:

...the prosecution may not use statements...stemming from custodial interrogation of the defendant unless it demonstrates the use of procedural safeguards effective to secure the privilege against self-incrimination. By custodial interrogation, we mean questioning initiated by law enforcement officers after a person has been taken into custody or otherwise deprived of his freedom of action in any significant way."

The court's decision established a couple of key legal points: that the right against self-incrimination takes effect from the moment a suspect is in police custody, not just at trial; and that any confession obtained without the suspect being explicitly warned of this right is involuntary [source: FindLaw]. Therefore, the court held, a defendant had to be informed of his rights before being interrogated if his statements were to be admissible in court. Since that 1966 ruling, a voluntary confession made in police custody is one preceded by a reading of the Miranda rights:

1. You have the right to remain silent.

2. Anything you say can be used against you in a court of law.

3. You have the right to an attorney.

4. If you can't afford an attorney, one will be appointed for you.

Many law-enforcement agencies throughout the country have since added a fifth warning to the court-established rights, which states, "If you waive these rights, you may still invoke them at a later time" [source: Law and Justice].

And since that ruling, questions have swirled around the law, most of them related to three words in the court's decision: "Taken into custody."

The 1966 case before the court was a consolidation of four related appeals: Miranda v. Arizona,Vignera v. New York, Westover v. United States, and California v. Stewart. In all cases, the suspects were questioned without being told they had rights to silence and counsel, confessed after lengthy interrogations, and had those confessions used against them in court.

The circumstances under which Miranda applies are clear: If a suspect makes a statement during "custodial interrogation," it can only be used against him if he was first "read his rights" and waived them [source: FindLaw]. The court's reasoning for the distinction between custodial and noncustodial questioning, as stated in the 1966 ruling, is that "the process of in-custody interrogation ... contains inherently compelling pressures which work to undermine the individual's will to resist and to compel him to speak" [source: U.S. Courts].

The Miranda requirement establishes a way to prove, to a legal standard, that statements made in custody were made voluntarily. The problem is, "in custody" can be slippery. The Miranda decision defines it as the denial of complete "freedom of action," a criterion open to interpretation [source: U.S. Courts].

Sometimes, "in custody" is obvious. Under arrest? Sitting in a locked police car? Wearing handcuffs? In custody. Under any of those conditions, Miranda rights must be read before police start asking questions if they hope to have any of the answers admitted as evidence at trial.

Sometimes it's fuzzy, though. What if police arrive at a subject's home to ask him about a crime that happened down the block, and the subject doesn't feel free to leave (or ask the police to do so)?

Over the years, court decisions have helped to clarify some of the uncertainty. In the preceding example, the subject likely would not be considered in custody, since he wasn't under arrest and therefore could have told the officers to leave at any time; the perception of the subject is not a factor. Traffic stops, too, are noncustodial: If a routine traffic stop yields an un-elicited statement not preceded by Miranda warnings, it may be used in court [source: National Paralegal College].

Let's say, though, a suspect is clearly in custody. Police have arrested a woman for selling drugs, and they question her. She confesses. She wasn't read her rights. What happens?

She's not released. But the prosecutor can't use the confession as evidence at the woman's trial. And if that confession led directly to any other incriminating evidence, and that evidence would likely not have been uncovered by police without information gleaned from the confession, that evidence is out, too [source: NOLO]. It's "fruit of the poisonous tree."

There only one exception to this, and it was invoked under serious public scrutiny in 2013.

What Happened to Ernesto Miranda?

After losing that Supreme Court case, the state of Arizona retried Miranda without his confession. A former girlfriend testified he had confessed the rape to her. He was sentenced to 20 to 30 years in 1967 but was paroled after five years. Later he sold autographed cards with the Miranda warning on them. Miranda was stabbed to death in a bar fight in 1976 [source: Whiting]. 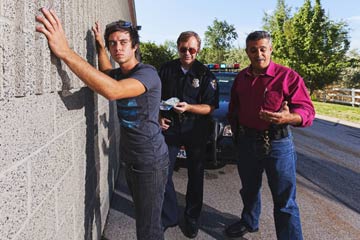 Every arrestee must be read his Miranda rights except in very special circumstances.
Terry J Alcorn/E+/Getty Images

The exemption was established in 1984, when the Supreme Court heard the appeal of New York v. Quarles. Benjamin Quarles was in the custody of police in a grocery store in 1980, identified by a rape victim as the man who'd assaulted her. The officer frisked him for weapons and found an empty gun holster. The officer asked Quarles where the gun was, and Quarles told him he'd hid it "over there," pointing to an empty milk container. The officer found it and secured it. He then arrested the man and read him his Miranda rights.

The gun evidence was thrown out at trial under Miranda. An appellate court agreed it was inadmissible. The Supreme Court did not.

The Supreme Court found that locating the missing gun was critical to securing public safety, and questions prompted by a reasonable concern for public safety were exempt from the Miranda requirement. Quarles' answer to the officer's question and the gun it led to were therefore admissible in court [source: Benoit].

In April 2013, the FBI invoked this exemption in questioning a suspect in the Boston Marathon bombing. During their "urgent public safety interview" with Dzhokhar Tsarnaev in his hospital room, he confessed to the bombing and answered questions regarding any other attacks still in the works. His request for a lawyer was denied several times. After two days of questioning, Tsarnaev was read his Miranda rights on a judge's orders and went silent. If a court determines the interrogation meets the public safety exception, the statements Tsarnaev made before he was read his rights may be used against him at trial [source: Serrano].

The same exception was invoked in the 2010 questioning of Faisal Shahzad, who failed in his attempt to bomb New York City's Times Square. But Shahzad, after being Mirandized, kept talking -- and never stopped [source: Johnson].

He pleaded guilty at trial, warned Americans to brace themselves for more attacks, and was sentenced to life in prison [source: Katersky]. The public safety exception never came up.