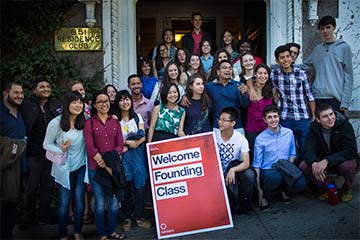 The founding class of the Minerva Schools at KGI posed for a picture in front of their dorm in the fall of 2014.
Shaul Schwarz/Reportage by Getty Images

In September 2014, a group of about 28 students from 14 countries became the first class ever to attend the Minerva Schools at KGI, a new four-year university experimenting with an entirely different approach to the traditional undergraduate experience. Lectures, entry-level classes and football stadiums are out; small, interactive online seminars are in. Rather than train students for a particular field or specialty, the Minerva Schools (Minerva, for short) seek to turn education on its head, trusting students to track down facts and general information on their own, and teaching them how to think critically, create and communicate across every academic discipline.

Minerva got its start in 2011 as the Minerva Project when CEO and founder Ben Nelson, a University of Pennsylvania graduate and the former CEO of Snapfish, decided to pursue his idea for a new university model. Nelson's goal was to do away with what he perceived as the failings and shortcomings of higher education, replacing impersonal old-school lectures with small, student-focused seminars conducted over an interactive online platform [sources: Minerva, Walker].

Minerva's backstory sounds in many ways more similar to an Internet start-up than an institution of higher learning. Based in San Francisco, Minerva was launched with a $25 million seed investment from the same venture capital firm that launched eBay and Twitter, and it will operate as a for-profit company [source: Kaminski]. Nelson hopes to eventually build a student body of between 7,000 and 10,000, although it's unclear how soon that might happen [sources: Kaminski, Walker].

Minerva bills itself as "a reinvented university experience for the brightest, most motivated students in the world," providing "an exceptional and accessible liberal arts and sciences education." The school is unapologetically selective. Nelson says that the school will accept all students that meet its admission criteria, but in its first year, Minerva received 2,464 applications from around the world and extended offers to just 69 students, giving the new university around a 2.8 percent acceptance rate (Harvard's was 5.8 percent in 2013) [sources: Minerva, U.S. News & World Report].

So how exactly does the Minerva Project work, and what makes it different from traditional colleges or online degree programs? Read on to find out! 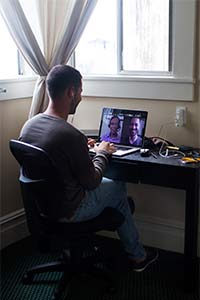 A student takes a class from the comfort of his room, using Minerva's proprietary online platform.
Shaul Schwarz/Reportage by Getty Images

First, forget the quintessential image of grassy quads, stately brick buildings and ivy-covered walls. Minerva skips all the trappings of the traditional college experience, including sports teams, fraternities, sororities, and even libraries, dining halls and student hubs. Sticking to only the most basic amenities not only saves money, but also keeps the focus on the curriculum and makes it easy to set up a Minerva location almost anywhere [sources: Kaminski, Minerva,Wood].

With classes taking place online, you might expect Minerva students to simply attend school from wherever they live, anywhere in the world. But that isn't the case. Minerva may have abandoned the traditional concept of a college campus, but Minerva students live together in a shared residence hall and are encouraged to gather for class excursions and field trips as well as social and cultural activities available in the city. The school curriculum emphasizes "global immersion," with students spending their first year in San Francisco and then changing locations every semester to experience a range of cultures and languages in different cosmopolitan centers. The locations were not yet finalized as of October 2014, but possibilities include Hong Kong, Buenos Aires, Berlin, London, Cape Town, Mumbai, New York and Sydney.

Unlike their students, Minerva professors may live anywhere in the world that has an Internet connection, a decision that Minerva says will help to attract and retain top faculty, as well as allow a single professor to teach classes in multiple locations [source: Wood].

All classes are limited to 19 students plus one instructor. Unlike massive open online courses (MOOCs), in which students often watch recorded lectures, or asynchronous online courses, in which an instructor posts assignments or questions for students to answer at a later time, Minerva's online classes take place in real time and are geared toward intensive discussion between instructor and students. The school's proprietary online platform – think of it as a sophisticated video chat – allows the instructor to communicate with the whole group at once, break students into smaller work groups or see how individual students are responding to the course material [sources: Minerva, Wood]

Atlantic magazine writer Graeme Wood was allowed to test-drive a course taught by French physicist Eric Bonabeau who split the all-video class into groups to defend opposite propositions. "No one needed to shuffle seats; Bonabeau just pushed a button, and the students in the other group vanished from my screen, leaving my three fellow debaters and me to plan, using a shared bulletin board on which we could record our ideas," wrote Wood. He found the continuous engagement fascinating but "exhausting."

One of the most basic requirements for any college -- especially a selective school whose primary selling point is an Ivy-League-worthy curriculum -- is accreditation. Colleges are accredited by independent regional review boards, and as a new institution, Minerva faced a potentially long process, with no guarantee of approval at the end. To speed up the process, the Minerva Project partnered with the Keck Graduate Institute (KGI) a small but accredited college near Los Angeles, forming the Minerva Schools at KGI [sources: Kaminski, Minerva, Wood].

Students at Minerva can expect to do a fair amount of work outside of class, and even before the semester starts. While the university does not use any MOOC-style lectures, students may be expected to review MOOC offerings from other institutions on their own, essentially completing the freshman-level coursework independently before working with classmates and professors on more advanced material [source: Wood].

The university emphasizes liberal arts and sciences, teaching critical thinking across all disciplines rather than having students specialize in one narrow field. At least initially, Minerva will offer just five majors: arts and humanities, social sciences, computational sciences, natural sciences and business.

Minerva's inaugural students seem to be well aware that they are participating in an educational experiment of sorts. In a newspaper article, founding class member Kayla Human described herself and her new classmates as "committed to Minerva's potential, but unsure of its reality ... My enrolling at Minerva is my joining the movement for radical change in education."

And the Winner Is...

The Minerva Institute houses the Minerva Academy, an honorary society of educators from established institutions. In 2014, the Minerva Academy presented Eric Mazur, a Harvard physics professor and researcher, with the very first Minerva Prize, a $500,000 award designed to recognize accomplishments in teaching innovation and excellence. Mazur was selected for a teaching method called peer instruction that he developed two decades ago [sources: Minerva Institute, Rocheleau]. Ben Nelson, the founder and CEO of the Minerva Project, hopes to see the Minerva Prize become a prestigious award on par with the Nobel Prize [source: Buchanan]. 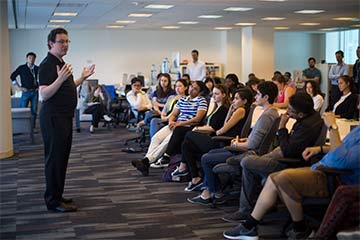 In every interview and press release, Ben Nelson and the representatives of the Minerva Institute and Minerva Academy emphasize that Minerva is an elite college, but in its first-ever semester (Fall 2014), Minerva's success, reputation and staying power have not yet been tested.

While some critics have questioned the for-profit structure of the university, Nelson maintains that the school will be more affordable than most nonprofit universities. Unlike many for-profit schools that rely on federal student aid for the bulk of their revenues, Minerva rejects federal funding altogether. By relying on private funding, Nelson estimates that he will save $1,000 per student in federal aid compliance costs [source: Wood]. Minerva's tuition of $10,000 per year is far lower than any of the Ivy League colleges, even when estimated room and board costs of $18,000 per year are added in.

For students who may have qualified for federal student aid, Minerva says it plans to offer internships, need-based scholarships and help with obtaining private loans. And while it may be difficult for the school to generate a profit through student tuition alone, The Wall Street Journal reports that Minerva could eventually generate revenue by offering conferences and executive education or licensing its content and proprietary seminar technology.

To be sure, the Minerva model won't appeal to everyone. Nelson himself concedes that if you long to be a college athlete, Minerva is not the place for you [source: Kaminski]. Just as some students prefer large party schools and some look for small, quiet liberal arts colleges, the Minerva approach to instruction and student life is sure to appeal to some academically minded students. But whether Minerva will have the draw to pull the best and brightest students from Ivy League institutions remains to be seen. Despite its stringent admission criteria and low acceptance rate, Minerva will probably need to graduate a class or two before it can be considered for inclusion in the U.S. News & World Report College Rankings.

For more about the Minerva Project and other nontraditional models of higher education, check out the resources on the next page.

It will be interesting to see what the future holds for the Minerva Project and especially for Minerva students. Having taught online courses several years ago for a different for-profit online university, and having experienced the Internet bubble (and bust!) at a dot-com startup, I see a few things that make me question the long-term feasibility of the Minerva Project, but I also think this venture introduces some new and different ideas that could help to change the way students and universities think about higher education.

Despite Benefits to Teens, Half of Parents Oppose Later School Start Times
How do colleges get accredited?
How do libraries work with ebooks?