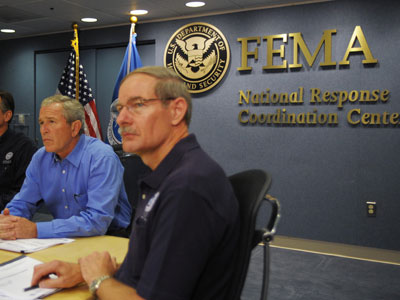 Federal agencies like the Federal Emergency Management Agency (FEMA) represent the point where the government touches the lives citizens. How these agencies are managed is left to the discretion of the president.
Mandel Ngan/AFP/­Getty Images

­In the United States, the legislative branch of the federal government creates new laws. For example, Congress created the Securities and Exchange Commission (SEC) to regulate publicly traded companies. The executive branch, led by the president, ensures these laws are enforced; it carries out the actual regulation of agencies like the SEC. It does so by issuing regulations that direct agencies on how enforce these laws. So the SEC may propose a rule that requires all companies to file earnings reports following a specific accounting method. The proposal is submitted for review, and, if approved, becomes law 30 to 60 days later.

The enforcement, creation and replacement of regulations are all generally left to the president's discretion. The president's viewpoint can determine how strictly the SEC oversees financial reporting among publicly traded companies. A pro-business president will likely take a hands-off approach, while a more socialist president will place a greater emphasis on giving the SEC teeth.

Federal regulatory agencies have a direct and encompassing impact on the lives of Americans and citizens around the world. They issue rules defining what constitutes profanity during a television broadcast, declaring pharmaceuticals safe for human consumption, allowing eavesdropping on Americans' private phone calls, and much more. Cumulatively, a president's regulatory decisions form the country's direction. This direction changes from presidency to presidency, and the change is most pronounced when control of the White House changes party hands.

The reticence of some presidents to relinquish this control might explain the popularity of what have come to be called midnight regulations, or the prolific creation of regulations that come at a presidency's end. The midnight of a presidency occurs every four to eight years in the "lame duck" period between the new president's November election and the late January inauguration that officially ends the outgoing president's administration. Once a president has served two terms or lost re-election, much of that administration's accountability is lost. Although the president is no longer beholden to the electorate, he or she still wields the same power.

Midnight regulation is a powerful tool in a departing president's arsenal. It can represent the final push of the president's agenda and often characterizes its more radical fringes. This flood of new regulation creates the potential for a president to extend his or her administration's influence long past its departure from the White House. Midnight regulations are often slipped past Congress, (which may be only partially operating) and usually occur in such volume that it will be nearly impossible for the next administration to unravel the tangled web they weave. As a result, a new administration looking to steer the country in a new direction can find the wheel stuck tightly in the opposite one.

An outgoing administration can easily use midnight regulations to handicap the effectiveness of a new one. Not only can changing these last-minute rules cost time and resources, but undoing them can also lead to embarrassing situations and political fights. Presidents may also create this final agenda push to curry favor with the outgoing president's party and avoid the partisan dogfights that characterize this period. This is a smart move, as there is life beyond the presidency. By chairing his or her party or by taking a leading party position, a seasoned former president could try to exert a Putinesque influence over less experienced party members (or possibly another president) when his or her party regains White House control.

­Because of the outgoing president's relative lack of accountability during his or her midnight period, prolific regulation during the last quarter is often criticized as undemocratic [source: Brito and de Rugy]. Yet, it's the rules of democracy that have allowed this cynical use of presidential power to continue.