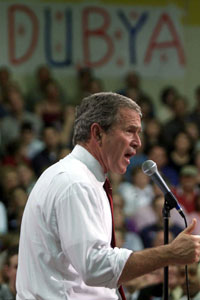 ­When Texas governor George W. Bush ran for president of the United States in 2000, he crafted a folksy, approachable image for himself. It worked. Bush won the new, yet vital Sam Adams/Roper Starch poll -- 40 percent of Americans polled said they'd prefer to have a beer with Bush over his rival for the presidency, Vice President Al Gore [source: Business Wire]. Bush's image was eventually encapsulated within a single letter, W, his middle initial. Eventually, it morphed into a variation on the letter pronounced in a Texas drawl: Dubya. The everyman's presidential candidate was born.

After the United States Supreme Court ruled against a recount of contested votes in Florida and Bush was named the new president, he and his transition team entered the White House to begin the new administration in January 2001. Dubya quickly found that his predecessor, Democratic two-term president Bill Clinton, had a sense of humor. The letter "W" had been removed from almost all of the computer keyboards in the White House executive offices [source: Brillman].

Bush soon found bigger, less entertaining headaches that Clinton had left for him -- more than 26,000 pages of new regulations issued by the outgoing president during the last two months of his administration. Among them was a reduction in acceptable arsenic levels from 50 to 10 parts per billion. Bush opposed the decrease, citing the potential financial impact on industries like mining, and quickly suspended Clinton's regulation with an executive order.

­That move allowed ecological groups to paint the Bush administration as anti-env­ironment, an image that would come to characterize his presidency. Bush later relented and accepted the Clinton standard, regretting the initial opposition as "one of the worst moves of his young administration" [source: Seelye]. Bush expended a tremendous amount of political capital -- power and influence generated throughout his campaign -- for his losing fight against the arsenic standards. Through a presidential tool known as midnight regulation, his predecessor had forced him into an embarrassing situation.

­What are midnight regulations? Why are they used with such glee by outgoing presidents -- and such a pain in the neck for new administrations? Find out on the next page.