Merriam-Webster Adds More Than 1,000 New Words to the Dictionary

by Jesslyn Shields Feb 13, 2017
Language constantly evolves; so must the dictionary. tcp909/Flickr

Like living organisms, languages are constantly evolving. Grammar and syntax change over time, but perhaps the most rapid shifts happen in the words we use. Think of the English language as huge wall, with new words getting launched at it all the time. Some stick fast, while others slide off it at various rates of speed, eventually cycling out of use all together.

This is all very interesting to think about casually, but to the publishers of dictionaries like Merriam-Webster, hypothesizing about which new words have staying power and which will fade into oblivion is serious business. A new edition of the Merriam-Webster's Collegiate Dictionary comes out once every decade or so, which means the company has the weighty responsibility of deciding which new words will define the generations.

For instance, during the 1960s height of the Beach Boys, the dictionary added the word hodad: "a nonsurfer who frequents surfing beaches and pretends to be a surfer." Hodad was subsequently banished to the Unabridged version of the dictionary because decades later, surfers were replaced with goth guys, and thence became culturally irrelevant, "Point Break" notwithstanding.

Merriam-Webster has just released a new edition of its Collegiate dictionary, and has added more than 1,000 new entries. Among them are words relating to the technological devices that have taken our society by storm: binge-watch, NSFW, net neutrality and photobomb. Sports has given us airball, while foodies (and Rachael Ray) have contributed EVOO and expanded the definition of artisanal. And from politics, we're getting FLOTUS, SCOTUS and truther. The list keeps going: safe space, bokeh, santoku, pareidolia...

So, how does the Merriam-Webster staff decide which words to include in a new edition?

"These are words that have demonstrated frequent and increasing use in a variety of sources, and are therefore likely to be encountered by a reader—and should be in the dictionary," say the Merriam-Webster editors in a press release. "In some cases, terms have been observed for years and are finally being added; in others, the fast rise and broad acceptance of a term has made for a quicker journey."

Stay tuned for the 2027 edition to see which of these new words ends up sticking.

Now That's Interesting
Snollygoster, which means "a shrewd, unprincipled person," was removed from Merriam-Webster's Collegiate Dictionary in 2003, but is making a triumphant comeback thanks to Fox News host Bill O'Reilly's frequent use of it on his show.

A Newly Surfaced Photo of Harriet Tubman Is Going to Auction

Some People Are Smoking Scorpions to Get High 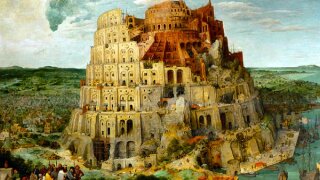 What if everyone on Earth spoke the same language?