Does mermaid folklore exist around the world? 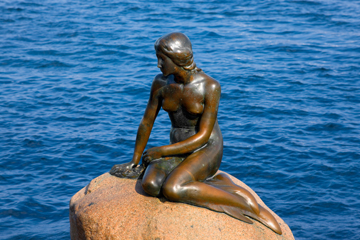 This little mermaid statue decorated the Copenhagen harbor long before Disney's Ariel ever swam to the surface.
Visions Of Our Land/Thinkstock

Lisa's 6-year-old daughter has been taking swimming lessons -- and loving it. Within just a few months, she's gone from "guppy" to "mermaid," mastering several different strokes and navigating the swimming pool from end to end with ease. Lisa invites her daughter's grandmother to watch one of the lessons, and while she's snapping pictures with her smartphone, Grandma is quick to say, "She's turning into a real mermaid!"

Whether it's a precocious swimmer or an underwater-themed birthday party, mermaids are part of popular culture. Stories about these mysterious, half-fish, half-humans have cropped up around the world for centuries. Although each culture's depiction of a mermaid is different, many have common themes. In Europe, Africa and the U.S., for example, mermaids are believed to carry combs and mirrors bestowed with magical powers that allow them to control entire kingdoms. Other traditions depicted mermaids as water spirits, but were later influenced by exposure to cultures that believed mermaids had a half-woman, half-fish appearance.

The mermaid Lasirn, for example, is a mainstay of Caribbean legends that incorporate African and European folklore. Her name is derived from sirne, the French word for mermaid. Lasirn's mirror symbolizes the boundary between sky and water, and she's able to imbue her followers with powers. In some countries, such as Haiti, Lasirn is one of three water spirits worshiped in shrines.

People have been claiming mermaid sightings for centuries. In 1493, Christopher Columbus thought he saw three of them off the coast of the Dominican Republic, but they were actually manatees. Not surprisingly, he said they were "not half as beautiful as they are painted" [source: History]. In 2009, a number of beachgoers in the Israeli town of Kiryat Yam claimed to have spied a mermaid in the water just as the sun was setting. The town's tourism board has offered a $1 million reward for a photograph of the mermaid, but so far no one has claimed the loot.