An Evolutionary Reason for Women to Cheat? 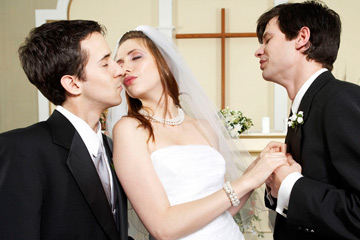 The girl can't help it -- it's that time of the month.
© 2009 Jupiterimages Corporation

Using evolutionary psychology to explain human behavior can be somewhat controversial, but the field provides some interesting reasons as to why men and women may cheat. From an evolutionary standpoint, men cheat because they feel an imperative to spread their genetic code as much as possible, to ensure they have heirs. Men would also be upset by a woman's infidelity from a purely sexual point of view, because they don't want to waste hard-earned resources raising another man's children.

Women, on the other hand, might be more upset by their lover's emotional infidelity, because it threatens those resources she needs for her children. But because women are so invested in receiving those resources, researchers weren't sure at first why women would threaten them by cheating at all. As it turns out, even after women choose a partner that they deem worthwhile to father their children, researchers believe they still seek out a better one in a competition that we'll deem "Sperm Wars."

Here's how Sperm Wars works: According to a 2006 study published in Hormones and Behavior, women tend to be unfaithful at the most fertile part of their menstrual cycle, even if they're not trying to get pregnant. And the men they tend to cheat with are by and large better looking than their own partners. Even if their own spouse is a hardworking, high-earning, compassionate man, the study revealed, women would cheat if they didn't find the man attractive, perhaps because of some old instinct that good genes are synonymous with good looks [source: Jayson]. If women sleep with several men at their most fertile point, the Sperm Wars are underway: the best sperm wins, and the woman is ensured the best child she can get. From an evolutionary standpoint, that's important, as a woman spends nine months producing a child (a man, of course, may spend only a few seconds), so she wants to get the most bang for her buck, genetics-wise. She may also risk losing her partner's resources if she believes she can get better resources from another male. In other words, women are not likely to go slumming when they cheat; they'll always look for the best deal possible.

Researchers at Florida Atlantic University have found that men are somewhat affected by the Sperm Wars phenomenon. If a couple is separated a long time, time in which the woman could have been unfaithful, the man will produce more sperm the next time they have sex, which gives him better odds of impregnating his partner. Furthermore, the researchers noted that artificial penises have the ability to remove substances from artificial vaginas, so men may be able to handicap their sexual rivals. Certain sexual positions are best for removing another man's sperm -- most notably, deep thrusting. The FAU researchers claim that sexual relations following accusations of female infidelity often feature deep thrusting, as if the man is trying to become the ultimate victor in Sperm Wars [source: Association for Psychological Science].

For more on Sperm Wars' players, see the links below.