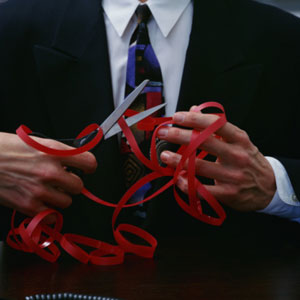 Bureaucrats like MOUs because the informality of these documents allows them to dodge the kind of scrutiny and red tape that so often plague contracts and treaties. MOUs skirt processes that would slow down implementation and cooperation, thereby helping parties get things done much more quickly than they would through more formal channels.

For example, when multiple government agencies need to define their responsibilities and pool their resources for a project, they often write MOUs instead of contracts, especially when contracts between government divisions are restricted by law. Although some interagency relationships can be formed and maintained by informal understandings between executives and workers, others are more complicated and require a paper trail. That's where MOUs come in.

MOUs are a signed commitment from the agencies to work together in a specified way. For example, when the U.S. Department of Veteran Affairs and the Indian Health Service wanted to better the health care of American Indian Veterans, they signed off on a plan to improve resource sharing and coordination between the two agencies.

Another interagency MOU, between the U.S. Department of Agriculture, the Food and Drug Administration and the National Institutes of Health, was created in 2011 to protect the welfare of laboratory animals. This MOU outlined proper care and use of the animals, and attempted to prevent duplication of efforts between the organizations.

Memoranda of understanding work well between the governments of countries, too, sometimes to expedite an agreement on time-sensitive issues. These documents are used for purposes both dramatic and mundane.

In 1973, the U.S. and Cuba signed an MOU that made the hijacking of airplanes and other vessels a criminal offense. In 1996, Iraq signed an MOU that indicated it agreed with terms of an oil-for-food program, which allowed the country to sell its oil to buy food for its citizens, who were suffering under embargo conditions enforced by the United Nations. In 2004, Brazil and Canada signed an MOU that let each country share best practices with regard to labor inspections, occupational safety, compensation systems and more.

But even in international situations, MOUs aren't binding. They are considered a kind of soft law, which means they are weaker (less enforceable) than traditional "hard" laws but still provide evidence of both parties' intent to follow through on an agreement. Soft laws like MOUs provide an appealing way for countries to cooperate in place of treaties, which are binding and can result in serious international repercussions when broken.

Now you know why memoranda of understanding are so widespread. Next, you'll get the low-down on some of the best-known (and maybe even hated) MOUs around.