Browse the article How can you protect yourself from Medicare fraud? 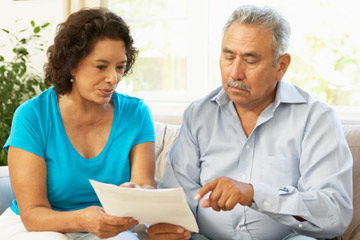 Batman, Superman, Wonder Woman, Captain America -- the most famous superheroes are often depicted as young men or women. But if you thought membership in the AARP disqualified you from superhero status, think again. The U.S. government needs you, senior citizens. You're being called up to the front lines in the battle against Medicare fraud.

Sure, Medicare fraud may not be as flashy an enemy as The Joker or Lex Luthor, but it's no less evil or insidious. Unchecked, Medicare fraud costs the United States upwards of $60 billion each year (the exact number is unknown; $60 billion is considered a conservative estimate) [sources: Allen; Silberner]. This loss hurts everyone because it raises the cost of health care coverage across the board. That means there are a lot of damsels in distress and people in a pickle out there that need help.

The Obama administration has made fighting Medicare fraud a top priority. The Affordable Care Act includes significant funding for FBI agents and prosecutors to wage war on these criminals. The Department of Justice and the Department of Health and Human Services are collaborating on Health Care Fraud Prevention and Enforcement Action Teams (HEAT), and in July 2010, the departments announced a major win -- they'd made arrests in a Medicare scam that totaled more than $251 million [source: Associated Press].

While the government works to find and prosecute Medicare criminals, senior citizens are making their way to the combat zone. They are, after all, the ones with Medicare numbers that could be stolen and the ones receiving services that could be reported incorrectly. So put on your superhero suit, and we'll explain what to be on the lookout for and what to do when you suspect something's wrong. 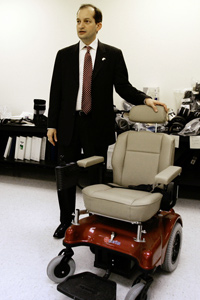 U.S. Attorney Alex Acosta shows a wheelchair that was used in a case of Medicare fraud worth more than $2.8 million in 2006. Patients would sit in the chair to prove they needed it, then submit a photo of that to Medicare.
Associated Press/J. Pat Carter

There may be many perpetrators of Medicare fraud. Some patients may "rent out" their Medicare number, claiming they received services so that someone can bill the system in exchange for cash. Doctors may get involved so that they can pad their billings. Some people will just set up a post office box, pretend to be doctors or medical equipment suppliers, and start billing Medicare with stolen numbers. In 2009, the Associated Press reported that even mobsters and violent criminals are getting in on the act -- compared to drug dealing, the payoff is more lucrative and the punishment less severe. Hotspots for Medicare fraud include Miami, Los Angeles, Detroit and Houston [source: Kennedy].

Though Medicare scams are constantly evolving, one common type of fraud involves medical equipment such as wheelchairs, walkers or hospital beds for home use. Doctors or suppliers may bill Medicare for delivery of a wheelchair yet never actually deliver the device. Or, they may show up at a patient's doorway with a wheelchair, claiming it's a gift from Medicare. Another scheme involves billing Medicare for prosthetic arms and legs -- for a person who has never had an amputation [source: Potter].

The Medicare program doesn't have the resources to investigate every single claim, and it tries to process payments quickly. If a doctor reports that that he or she provided services to a Medicare patient, Medicare tries to pay that doctor for the work as soon as possible. The key to the doctor or the medical supplier's claim, though, is a Medicare number. If someone has your Medicare number, that person can wreak a lot of havoc before being caught. That's why it's very important to guard this number with vigilance. Many recent Medicare scams have been successful because senior citizens just gave their numbers away on the phone. For example, the Affordable Care Act dictated that Medicare recipients would receive rebate checks to account for the prescription drug coverage gap. The checks were to be mailed directly to seniors, with no action on their part, but some scammers started calling seniors to ask them for their Medicare number, claiming it was necessary to complete the rebate process.

So how can you tell when your doctor is reliable? And when is it OK to give out your Medicare number?

How to Avoid Medicare Fraud 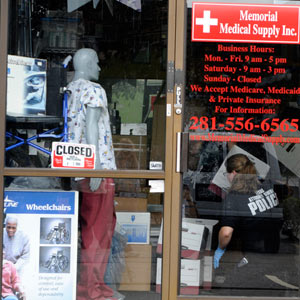 A police officer gathers evidence at medical supply company believed to be involved in Medicare fraud in 2009.
Associated Press/Pat Sullivan

The most important step to avoiding Medicare fraud is protecting your Medicare number. Never give it out to someone who calls on the phone, someone who comes to your door, or to a Web site. The government never reaches out to Medicare recipients in these ways. In fact, Medicare is a bit like a guy or gal who's just not that into you -- Medicare never calls, never drops by. If Medicare is stalking you, something is very, very wrong. You can give your Medicare number out over the phone only if you're the one who called Medicare.

Most doctors have our best interests at heart, but some, unfortunately, are crooked. Be wary of a doctor who tells you that a service or a piece of equipment is free. Nothing is ever free. Doctors who rely on intimidation or scare tactics to get you to agree to certain medical tests or procedures shouldn't be trusted, and neither should doctors who say something like, "This won't be covered, but I can figure out a way to get Medicare to pay."

Whenever you have a doctor's appointment, make a note of the date you saw the doctor and the services you received. Then, when you receive a summary notice from Medicare, go over it carefully. If you see billings for any appointments, medical supplies or services that you didn't receive, then call your provider. It's possible that it was a simple billing mistake, or that you forgot to write down all the tests that were ordered. But if a doctor's office can't provide a reasonable response to the discrepancy, then you'll want to make a report directly to Medicare by calling 1-800-MEDICARE (1-800-633-4227). If you prefer to write an email or a letter, please see http://www.stopmedicarefraud.gov for contact information.

Guarding your Medicare number and studying your statement are the two best ways to protect yourself from fraud. But if you'd like to do more, consider joining the SMP Program. Formerly known as Senior Medicare Patrol, the SMP Program is comprised of senior citizen volunteers who teach their peers how to decode their summary statements. When something is fishy, the SMP volunteers turn the matter over to investigators. These crime-solving seniors have saved the government at least $100 million since 1997 [source: Sedensky]. If you're interested, you can find out more at http://www.smpresource.org.

For more on Medicare and other forms of health insurance, see the links on the next page.