Browse the article Can the U.S. President Ever Declare Martial Law? 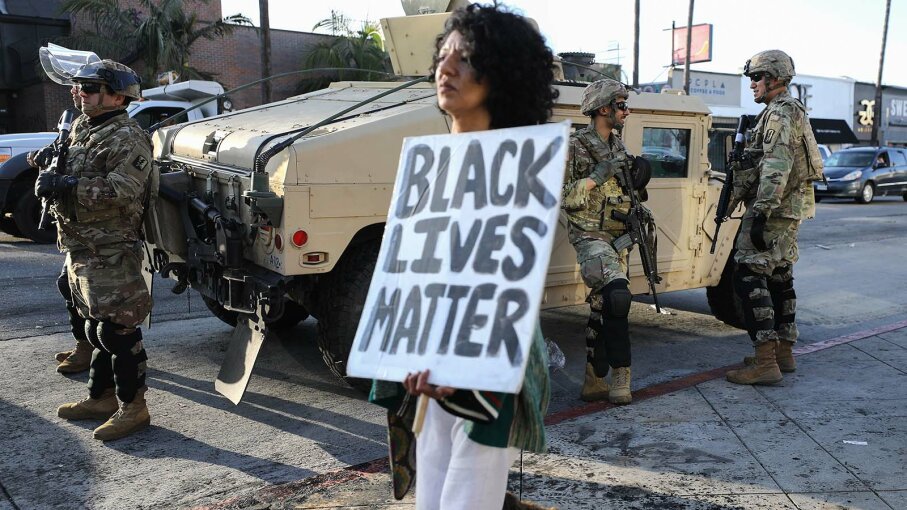 A protester holds a Black Lives Matter sign next to U.S. National Guard troops in L.A.'s Fairfax District, which was damaged during unrest on May 31, 2020 in response to the killing of George Floyd by a Minneapolis police office. Mario Tama/Getty Images

On June 1, 2020, as unrest surged in cities across the nation after the killing of an African American named George Floyd by Minneapolis police, President Donald Trump went to the Rose Garden of the White House to make a startling announcement. As protesters thronged in the streets outside the compound's fence, Trump ordered governors and mayors to stop the disturbances.

"I have strongly recommended to every governor to deploy the national guard in sufficient numbers that we dominate the streets," Trump said. "If a city or state refuses to take the actions that are necessary to defend the life and property of their residents, then I will deploy the United States military and quickly solve the problem for them," Trump proclaimed. He added that he already was dispatching "thousands and thousands of heavily armed soldiers" and other personnel to stop violence in the nation's capital.

Sources told NBC News that Trump was considering evoking the Insurrection Act, a law passed back in 1807 and expanded in 2006, which gives the president authority to use U.S. armed forces, including the National Guard, inside U.S. borders to restore order and enforce laws in limited circumstances (more on this later). Critical commentators quickly responded that Trump had overstepped his authority.

"Any attempt to use the military against civilians in this fashion would almost certainly be illegal and unconstitutional," Washington Post blogger Jennifer Rubin, an attorney, responded.

Nevertheless, the words "martial law" and the hashtag "#MartialLaw2020" began trending on Twitter, as critics of the president began claiming that it was the first step in a military takeover and suspension of democracy.

What Is Martial Law?

So what is martial law, exactly that some are so worried about? Imposition of martial law, in which military forces take over the authority and functions of civilian government, is something that's happened in other countries, such as Thailand and Pakistan. But it has never been imposed in the United States on a nationwide basis.

Though martial law is technically allowed by the U.S. Constitution, experts say that federal law bars the military from seizing authority over an area inside U.S. borders, except in extreme instances, such as a rebellion against federal rule or a situation in which local or state civilian rule breaks down and courts stop functioning. The U.S. military does sometimes go into action inside U.S. borders to deal with natural disasters, public health emergencies and civil disturbances such as rioting, but usually it's in a supporting role to help local and state government officials and agencies.

Essentially, "it's against American law to have martial law," Dov Zakheim, a former under-secretary of defense in the George W. Bush administration who now is vice chairman of the board of trustees at the Foreign Policy Research Institute, explained in a phone interview in March. He cited the Posse Comitatus Act, an 1878 statute that in most instances bars military forces from being used in law enforcement activities.

"The military can't act as a police force," Zakheim said. He maintains that "anybody who talks about martial law doesn't know what they're talking about."

During a 10-day period in 1936, National Guard troops turned away penniless laborers who tried to come to Colorado from the New Mexico border.
Library of Congress

What Role Does the National Guard Play?

Though the U.S. president can call up the National Guard for non-police uses within U.S. borders, it's usually done in a particular state by the governor, who also functions as commander-in-chief of the state's National Guard forces. In some instances that deployment is authorized by the president under Title 32, which means that although the forces stay under state command, the federal government pays for the expense.

In the U.S., the civilian-military relations might be strained at times, but "the military is totally committed to civilian control," Zakheim said.

Generally that means that National Guard forces do things such as distribute food and medical supplies. For example, in Arkansas and several other states, guard members have been staffing the call centers for medical information lines and setting up local centers where sick people are being tested for COVID-19.

But there is a legal exception under which the National Guard can be deployed to enforce laws or maintain order. In 1807, Congress passed the Insurrection Act, which gave the president the authority to use military forces to suppress a revolt against the government. In 2006, as part of a defense authorization bill, Congress expanded the president's powers, allowing him (or her) to send troops when he/she determines that "constituted authorities of the State or possession are incapable of maintaining public order."

But it's not clear how far that power really extends, as this 2018 Congressional Research Service report explains. Just two years after the law was amended, the George W. Bush Administration's Office of Legal Counsel issued an opinion, saying that invoking Insurrection Act powers "would require the presence of an actual obstruction of the execution of federal law or a breakdown in the ability of state authorities to protect federal rights."

Legal scholars are similarly skeptical. "The Insurrection Act may be invoked only following an invasion, insurrection or widespread domestic violence," William C. Banks, a distinguished professor of law at Syracuse University and a widely regarded expert on national security law, explained via email in March. "Only if states attempt to leave the Union would state defiance enable Insurrection Act authority. Otherwise the states control their citizens' health, welfare and safety."

"The basic idea is that when civil law can't function, the military has to come in as expedient, to maintain order," Geoffrey Corn, a professor at South Texas College of Law Houston and a former Army officer, explained via email in March.

If civil authorities can keep order, then the invocation of martial law would be invalid, and lots of constitutional rights would be violated, Corn said. "For example, if a military commander ordered confiscation of resources that would be a due process violation, because you would have been deprived of property without due process. An arrest similarly would violate the Fourth Amendment."

It's hard to say what nationwide martial law would look like in the U.S. today, because it's not something that's happened in a long, long time. One instance was in 1941. Following the Japanese attack on Pearl Harbor, Gov. Joseph B. Poindexter, with the approval of President Franklin D. Roosevelt, ordered the imposition of martial law in Hawaii, which was still a territory, so that the military would have a free hand in fortifying island of Oahu against a feared Japanese invasion. Additionally, FDR may have feared a revolt by Hawaii's 150,000 Japanese Americans, who amounted to 35 percent of the population, according to this 2017 Stars and Stripes article.

The military sent 2,000 of Hawaii's Japanese Americans off to internment camps, but they severely limited the rights of the others, and the rest of the population as well. A strict curfew barred anyone from being on the streets at night, and everyone over the age of 6 was fingerprinted, registered and required to carry identification cards issued by the troops.

In addition, military intelligence compiled secret dossiers on many Hawaiians. The military also took over the phone company and the mail to control communications, and barred publication of any book, newspaper or magazine that wasn't in the English language. Military tribunals took the place of criminal courts.

Recent Uses of Federal Force in the U.S.

This all continued until October 1944, when FDR terminated military rule. After the war, a 1946 Supreme Court decision found that the military's imposition of tribunals was unconstitutional. But use of military force inside the U.S. didn't end there. In 1954 after the Supreme Court ruled unanimously in Brown v. Board of Education that segregation in public schools was unconstitutional, federal forces were used five times in the South. First, in 1957 when President Dwight Eisenhower called out federal troops to integrate the Little Rock Nine at Central High School in Little Rock, Arkansas.

In 1962, Attorney General Robert Kennedy sent federal troops to Oxford, Mississippi, when federal marshals couldn't control rioting after James Meredith was admitted as the first African American student to the University of Mississippi. And on June 10, 1963, President John F. Kennedy deployed federalized National Guard troops to the University of Alabama to force its desegregation.

After Kennedy's assassination, President Lyndon Johnson sent troops back to Alabama in June and September 1964 to enforce court orders to integrate schools and again in 1965 to protect protestors during the civil rights march from Selma to Montgomery.

In 1992, President George H.W. Bush utilized the Insurrection Act and sent several thousand federal troops into the city of Los Angeles to an effort to restore order after local authorities and the National Guard were unable to stop rioting prompted by a jury's acquittal of police officers who had beaten an African American suspect, Rodney King, after a car chase. Bush did so at the invitation of California then-governor, Pete Wilson, who issued a proclamation, as JustSecurity blogger Mark Nevitt details. Bush was criticized for the decision, and subsequently lost his reelection bid that fall.

Minnijean Brown, 15, one of the Little Rock Nine, is seen here surrounded by members of the 101st Division of the Airborne Command as she arrives outside Central High School in Little Rock, Arkansas, Sept. 25, 1957.
A. Y. Owen/The LIFE Picture Collection via Getty Images

But Robert M. Chesney, a professor and associate dean at the University of Texas School of Law and a co-founder of the Lawfare blog, warned in an email in March that if an emergency ever did occur across the U.S that required military intervention, there's also the danger that even a short-term military takeover might do permanent damage to democracy.

"That would depend on what, exactly, were to happen, Chesney wrote. "If there is some tragic circumstance that genuinely warranted martial law (say there is an invasion, or a disaster so massive that all civil authority is just gone), then yes, there would be impacts but presumably they would be outweighed in the circumstances. On the other hand, if martial law was applied without sufficient justification, then it is by definition harmful to liberty and the rule of law."

Now That's Interesting
The classic 1964 movie "Seven Days in May" based upon a novel of the same name, depicted a plot by U.S. military leaders to overthrow an unpopular U.S. president because of his support for a nuclear disarmament treaty. It starred Burt Lancaster and Kirk Douglas, and was directed by John Frankenheimer.